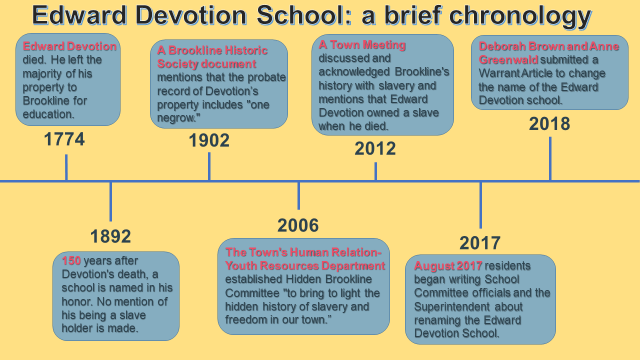 “You just picture a little black kid having to walk into a school with the name of a slaveholder,” Brookline resident Deborah Brown said during an Ad Hoc Task Force meeting on March 27.

The Ad Hoc Task Force, a committee open to the public that discusses issues in the community, and led by Helen Charlupski is addressing a petition made by Deborah Brown and Brookline resident and Devotion parent Anne Greenwald to change the name of the Edward Devotion School because Edward Devotion was a slaveholder.

Deborah Brown contacted the Devotion PTO and the Brookline School Committee in August 2017 and heard no response until The Boston Globe published a story on the matter on Feb. 28 2017 and then the Brookline Tab on March 14.

The Devotion School is currently under construction and will be re-opened next September. Those who want to change the name hope to do so in time for the re-opening.

In order for the name to be changed, The Ad Hoc Task Force needed to decide whether or not to form a task force that would investigate the name. On March 27 a tentative committee was formed to begin the investigation.

If the task force decides that the name should be changed, that recommendation would be brought up to the Town’s Naming Committee, who would then decide on a new name, and this would then be taken to Town Meeting for a vote.

“We don’t have {a process for changing a name} because first we are deciding whether we should change the name or not,” Charlupski said. “So the School Committee will need to figure out how we will give a name, because we’ve never done it, at least not in recent history.”

A list of possible members from March 27 indicates that the committee may consist of Devotion alumni who are still prominent members of the community, and a member of Hidden Brookline, which is an organization that studies Brookline’s history with slavery and the abolition movement.

According to Greenwald, she co-petitioned to change the name because she wanted to educate the community about the town’s history with slavery.

“I think that we really need to bring to light the history of slavery in Brookline,” Greenwald said. “It’s about having people understand the role that slavery played in Brookline. I think there is a myth that slavery was only in the south, when it was in fact completely prevalent in the north.”

Both Brown and Greenwald do not want the name to be forgotten if changed; they hope that this process is educational to the community and that the town’s history with slavery will be remembered.

“All the division and turmoil that is present today goes back to that history,” Greenwald said. “We can’t really heal from it as a nation without acknowledging it and without making the stories of African Americans and Native Americans at the forefront.”