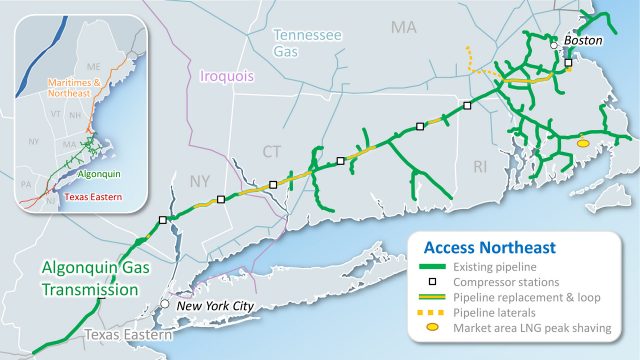 A new report by Synapse Energy Economics released on February 7th, 2017 shows that the new natural gas pipeline project advanced by Governor Baker and his administration will cost twice as much as proponents suggest and be unnecessary within a few years of completion.

The pipeline in question, Access Northeast (ANE), will expand the Algonquin Gas Transmission network in New England, following the existing path in Connecticut, Massachusetts, New York and Rhode Island bringing fracked gas from Pennsylvania and New York. With the addition of new compressor stations and a liquefied natural gas storage facility in Acushnet, Massachusetts, the pipeline will add an additional 500 million cubit feet of natural gas per day.

Proponents of the pipeline project, including Spectra Energy – a pipeline developer – and Eversource and National Grid utilities, cite the need for additional capacity during peak times as a rationale for the necessary expansion and place the price tag at 3.2 billion dollars. However, Synapse Energy’s analysis shows that when considering total costs for the pipeline, the number is closer to 6.6 billion dollars, with the ratepayers bearing that cost.

Brookline Mothers Out Front strongly opposes any new pipeline projects, advocating instead energy efficiency measures and energy storage development as a way to decrease peak usage.  We call on Governor Baker to change his pro-pipeline policies and views.  We don’t need new pipelines, Governor, and our children shouldn’t be stuck paying for them in physical cost and in climate degradation!