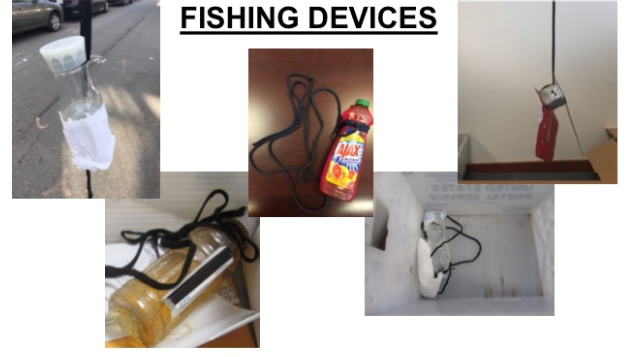 Police said crooks have been stealing mail from official post office mailboxes. The criminals will go up to a standard blue mail drop box, usually between 11:00 p.m. and 5:00 a.m. They will tie a plastic container, like a water bottle, to a piece of string and put some sort of glue on the outside of the container, usually glue from rodent traps. Then they will put it in the mailbox, allow letters to stick to it, and then pull the container back out.

The criminals will then use those letters to get personal information, like credit card numbers and checks.

Brookline police said a mailbox on Freeman Street has been hit three times in the last two weeks.

“A couple had mailed a couple of checks to their landlord. The landlord contacted them saying he never received the checks,” said Deputy Sup. Stephen Burke.

Burke said they have never seen anything like this in the past.

The postal inspection service says they believe a gang based in New York is behind the “fishing scam.” Several mailboxes across the state have been hit, including in Lawrence, Lynn and Worcester.

Police said they want to make it clear that they do believe it is still safe to use these mailboxes, but to call the local police department if you find any “fishing” devices.