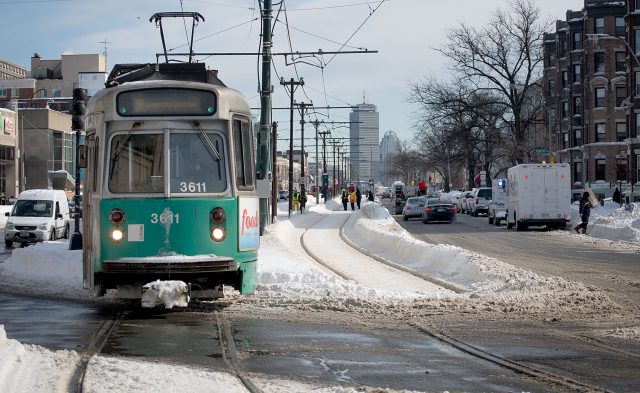 Yet, there are other larger capital questions bearing down on the MBTA’s Fiscal and Management Control Board.

On Monday, board member Steven Poftak told his colleagues the vehicle fleet plan under development will likely include “an almost full replacement of the Green Line” trolleys, and he said replacements are needed for 50 commuter rail locomotives and upwards of 200 commuter rail coaches in the coming years.

Work is already underway in Springfield toward a complete replacement of the Red and Orange line fleets, and Poftak forecast a “tremendous funding bulge” for vehicles in the early- to mid-2020s. He told the News Service, “There’s a lot of spending specifically on vehicles that piles up in those years.”

The control board, which assumed leadership of the T in 2015, will also face strategic questions about what type of vehicles to purchase for the commuter rail, how to address inner-city commuter rail capital needs, and whether changes to Green Line facilities might make future trolley purchases easier.

MBTA Control Board Chairman Joseph Aiello asked whether capital investments could be made to address “really tight turns” on the trolley tracks, thereby enabling the T to purchase trolley cars that are “more basic, as opposed to precious.”

“We order a lot of bespoke things in the system because it’s so old. And it would be nice to be able to order an off-the-shelf modern light rail vehicle that six other or seven other light rail systems use around the country because they would tend to be more reliable and cost-effective,” Aiello told the News Service.

Poftak said he anticipates a draft of the fleet plan will be presented to the control board in July, and Aiello said the plan “should be a very strong document in terms of providing guidance to financial, technical and operational people about what our investment needs are.”

Poftak, who has taken a lead role in addressing capital issues at the T, said decisions will need to be made about whether to continue purchasing diesel locomotives for the commuter rail, switch to electric or go hybrid.

“A commuter rail locomotive is a 25- to 30-year purchase. If we buy diesel locomotives, that is effectively making the decision that we will run a diesel system for the next 25 to 30 years,” Poftak said. “However, buying electric locomotives comes with a huge embedded fixed cost to electrify the system. If you want to split the difference and do a hybrid locomotive you’re talking about a 60 percent increase per vehicle in the list price.”

A similar question faces officials considering whether to purchase diesel multiple units or electric multiple units – a kind of cross between commuter rail and subway cars that could run on the Fairmount Line or other future inner-city routes.

“The industry is going to the electric multiple units,” Transportation Secretary Stephanie Pollack said. She said, “I really don’t want the T to be the last purchaser of diesel multiple units by the time we get around to it.”

T officials are also looking to settle on one type of bus to simplify maintenance of the roughly 1,000-vehicle fleet. Poftak said there are now 11 different bus models on the T system.

“Eleven propulsion systems to me just makes no sense,” Pollack said. She said officials need to “tackle this longstanding historic tendency” of making purchases without adequate consideration for T operations.

MBTA Chief Operating Officer Jeff Gonneville in early 2016 suggested the T should completely replace its Green Line fleet at a cost of about $1 billion.

Poftak said he envisions the fleet plan will call for an order just short of that.

“It is our expectation that our vehicle plan will contain an almost full replacement of the Green Line,” Poftak said. He said, “That’s a procurement we need to get underway.”