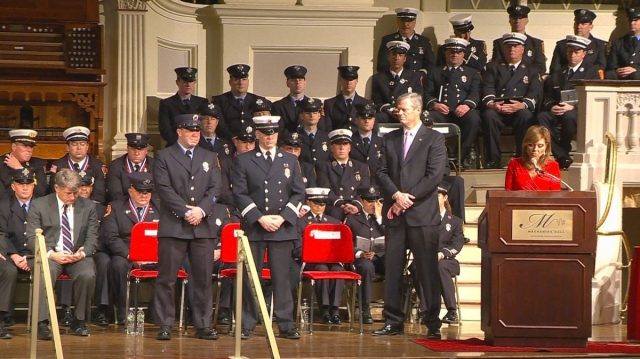 “The Commonwealth’s firefighters make tremendous sacrifices and risk their lives on a regular basis to protect the members of their communities,” said Governor Baker. “We are proud to salute this year’s award recipients, who drew upon their training and experience to perform remarkable acts that saved lives.”

“Our firefighters deserve our thanks and praise every day of the year, and it is important to recognize the incredible acts of bravery performed by these public servants in cities and towns across Massachusetts,” said Lt. Governor Karyn Polito. “Whether battling house fires or educating children and seniors on fire prevention and safety, we are grateful for their selfless acts.”

“Each of the 42 people who lost their lives to fires so far this year is a vivid reminder of the need to remain ever vigilant in our fire prevention efforts,” said Secretary Bennett. “Firefighters will always face danger in the work they do but through better technology and training we are working to mitigate those risks while supporting the courageous men and women of the firefighting community.”

Earlier this year, Governor Baker signed H. 3448, which doubled the line of duty death benefit for the families of first responders from $150,000 to $300,000. This benefit is afforded by statute to any firefighter or police officer, whether their status is full-time or reserve, as well as public prosecutors, municipal or public emergency medical technicians and correction officers who are killed in the line of duty or who sustain injuries that were the direct cause of his or her death.

“The members of the Western Massachusetts Safety and Fire Education Association work tirelessly to improve the safety of residents in our four westernmost counties,” said State Fire Marshal Ostroskey. “Their use of the mutual aid model for public education allows them to accomplish more together.”

The Governor and Secretary presented 33 awards in total:

This year’s awardees are: