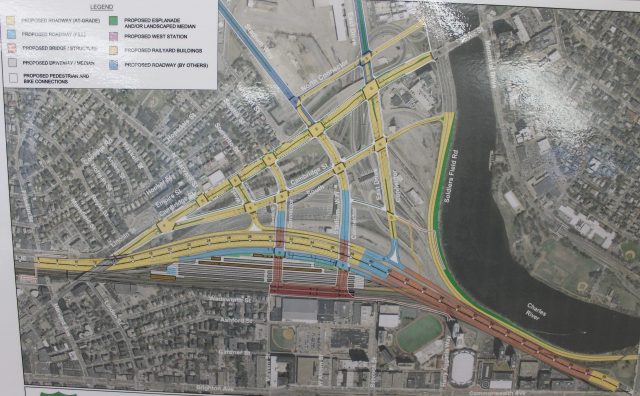 As MassDOT looks to finalize the details of its I-90 Allston Interchange Improvement Project, Brookline is weighing in on the project.

Curving around old rail yards and toll booths, the project is intended to improve the outdated I-90 viaduct, thereby improving traffic flow and creating space for development and enhancing connectivity and livability in the area. According to MassDOT’s website, this section of the highway has an average traffic volume of around 144,000 vehicles per day.

Though located in Allston, the project is seen as an opportunity for Brookline.

“It will be big and it will be at Brookline’s doorstep,” said Transportation Board member Chris Dempsey.

Recently, Brookline’s Transportation Board presented its feedback on the project in a nine-page letter to the Executive Office of Energy and Environmental Affairs, which is currently reviewing MassDOT’s plans.

The main element of the project is to straighten the I-90 viaduct which currently curves around rail yards and toll plaza space no longer in use. Straightening the viaduct will open that unused land – which Harvard University has purchased – for development of housing, commercial space and civic space, according to Dempsey.

In addition to updating the viaduct, the project is expected to benefit pedestrians, cyclists and public transit.

In particular, the project includes the creation of a new commuter rail stop on the Worcester/Framingham Commuter Line, to be named West Station. This station would serve as an alternative to those who currently use the B-line, Dempsey said, by offering faster service to downtown Boston.

Train service is not the only benefit to public transit users. The Transportation Board sees West Station as the opportunity to introduce a direct bus route to areas like Harvard Square.

“This is an opportunity to have a new bus line or a rerouted bus line that offers a more direct route,” said Dempsey.

Some Brookline residents have expressed concern that the new bus route and West Station would increase traffic in Brookline.

“Those are concerns the Transportation Board understands and supports,” Dempsey said. ”[The buses] would provide great access to Brookline without being on our streets.”

Depending on the design that MassDOT chooses, the changes stemming from the viaduct’s new layout could allow for easier access to the Charles River and the Esplanade.

According to Dempsey, MassDOT has indicated preference for a design option for an elevated, widened viaduct with shoulders and pull off space. Brookline prefers a different option.

According to Dempsey, the Transportation Board prefers a different option that would create a ground-level highway kept at the width it is today. This would enable a better connection to the Esplanade and Charles River and would save money.

The ground-level option is estimated to have a cost difference of about $100 million according to Dempsey.

The Executive Office of Energy and Environmental Affairs is expected to review the letter, as well as any input from other communities, and weigh in on MassDOT’s plans, according to Dempsey.