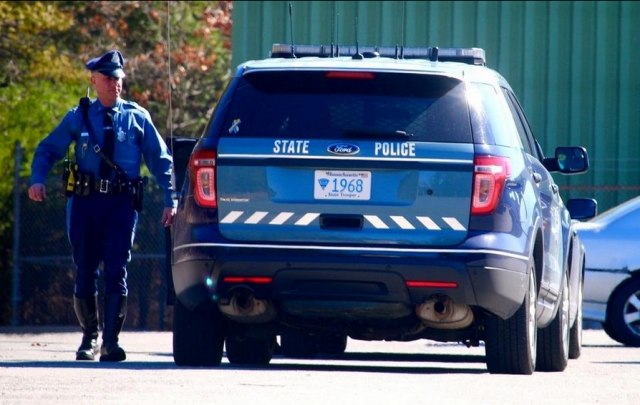 State Police arrested a Boston man after he drove over a police officer’s boot early Sunday morning during a traffic stop.

State Police got a call just after 3:00 a.m. about a black Chevy Impala. The caller, someone who was driving by, said the driver and a passenger looked passed out while it was stopped along Route 9.

As police were on the way, they received another call about the same car now located near the corner of Newton and Grove streets, and similarly the two people inside looked like they were passed out.

Trooper Paul Conneely approached the car at that intersection and it took some time to get the attention of the driver, who as the callers reported, appeared to be passed out, according to police.

But when they came to, the driver fled the scene, in the process running over the side of the trooper’s boot, said State Police spokesperson Lt. Tom Ryan.

“There were no injuries sustained but he did run over the side of the trooper’s boot,” he said.

Conneely was able to catch up to the car near the corner of Newton and Goddard streets in Brookline.

And following a subsequent investigation placed the driver, Adrian Rivera, 29, of Boston under arrest for operating under the influence of liquor as well as assault and battery with a dangerous weapon and negligent operation of a car, said Ryan.

It’s not the first time someone has almost injured a police officer attempting to make a getaway.

“I would say it happens more than we would care for it to,” said Ryan. “We have had similar situations in the past where troopers are attempting to engage with motorists and … occasionally do if they don’t want to interact with the police … have sped away from the area and caused injury to the police.”