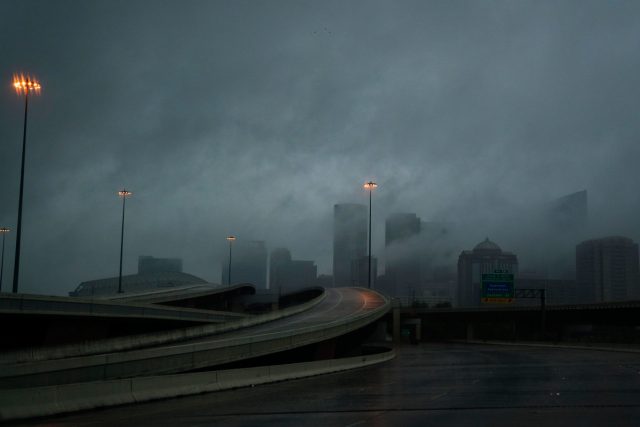 As the rain continues in Houston, southeastern Texas and Louisiana, residents of the area are trying to escape the epic flooding that is taking lives and destroying property. Many in Massachusetts are looking to help those living in and around the nation’s fourth-largest city.

More than 17,000 people have sought refuge in Texas shelters and that number seemed certain to increase, the American Red Cross said on Tuesday morning. That number does not include people who left their homes and who are staying with relatives, friends or strangers.

The rain from Harvey, which originally made landfall on Saturday as a Category 4 hurricane, is expected to make landfall again Wednesday morning, probably in southwestern Louisiana.

Here is a list of ways and places where Massachusetts residents can help to donate.

There are a number of local organizations, businesses and municipalities collecting goods to be mailed or delivered to Texas and victims of Hurricane Harvey.

Karyopharm Therapeutics Inc., a pharmaceutical company in Newton, is inviting the community to join the employees and donate items such as dry food, towels, clothes, books and baby items.

Members of the public can drop these items off in the lobby of Karyopharm’s office at 85 Wells Avenue, or coordinate a pick up by sending an email to harveyrelief@karyopharm.com and employees will pick up donations during the day on Friday. Karyopharm Therapeutics will arrange and cover the shipping to Texas.

York Kia of Medford is accepting all donations of clothing and household items such as blankets, diapers, bedding, etc. The employees are coordinating with the Watertown Fire and Police departments and plan to get the donations to Watertown on Sept. 11. York Kia is located at 60 Mystic Avenue, Medford, and there will be staff available to take donations 9:00 a.m. to 5:00 p.m. Saturdays, 12:00 to 4:00 p.m. Sundays, and 9:00 a.m. to 7:00 p.m. Mondays to Fridays until Sept. 10.

The City of Boston is sponsoring a “Help for Houston” Drive through Thursday, Aug. 31. The city will be collecting new clothing and blankets, toiletries, diapers, baby formula, and non-perishable food items at multiple locations including:

3rd Ave Burlington will hold a “Help for Houston” donation drive on Thursday, Aug. 31, where the community can donate items to those impacted by Hurricane Harvey in Texas. Diapers, non-perishable food, baby formula, toiletries, new clothing and blankets can be dropped off on Thursday between 8:00 a.m. and 7:00 p.m. at 62 Second Avenue, Burlington, across from Bedford Farms Ice Cream and Wegmans. Donated items will be delivered to Boston by local asphalt contractor Cassidy Corp, where they will join items collected by the City of Boston’s “Help for Houston” Drive to be shipped to Texas. For more information, visit here.

The staff at W. L. French Excavating Corporation Offices, 3 Survey Circle, North Billerica, is collecting items for the Help for Houston Drive in Boston. The staff will accept donations until 5:00 p.m. Wednesday, Aug. 30, and until 2:00 p.m. (3:00 p.m. most likely) on Thursday, Aug. 31. All Collections will be dropped off at Boston City Hall by 5:00 p.m. Thursday. Supplies that are being collected include baby supplies (diapers, wipes, formula and non-perishable baby food), water, nonperishable food, toiletries, blankets, towels, T-shirts, shorts and socks. The drive is also accepting gift cards to national chains.

Greater Houston’s Hurricane Harvey Relief Fund: Houston Mayor Sylvester Turner established the Hurricane Harvey Relief Fund. The fund is housed at the Greater Houston Community Foundation, a 501(c)(3) public charity. The donations will be used to help victims who have been affected by the floods. The organization will accept checks, money orders, bank wire transfers, stock, corporate bonds and other marketable securities. For more information and to donate directly to the Relief Fund click here.

Houston Texans star JJ Watt set up an online fundraiser called the Houston Flood Relief Fund on the YouCaring crowdfunding site. As of Tuesday afternoon, Watts hopes to raise $3 million. A goal he set after both $1 million and a $2 million goals were reached. He explained his thoughts and plans via his Twitter account. Watt donated $100,000 to those who’ve been affected by the storm.

The organization Feeding Texas states that it is taking steps “to coordinate with the state and other providers so that relief reaches families quickly and the ‘second disaster’ of an unorganized response is avoided.” They are encouraging donations to local food banks. For a full list of local food banks that may need assistance visit the Feed Texas link here. Local food banks are in need of staple foods such as powdered milk, cereal, pop-top meat, canned fruit, peanut butter, jelly and fruit cups. Cleaning supplies will also be accepted.

The Texas Diaper Bank is seeking diaper donations for both children and adults They are posting information about the need on their Facebook page. Those who wish to donate diapers or make financial contributions to the organization can mail them to 5415 Bandera Road, Suite 504, San Antonio, Texas 78238, visit here, or use this Amazon Wish List page.

The American Red Cross is providing assistance to those who have been displaced because of the flooding in and around Houston as well as people displaced by other damaged caused by Hurricane Harvey.

Those who wish to donate to the Red Cross can make donations on its website, RedCross.org, by texting HARVEY to the number 90999 to make a $10 donation, or by calling 1-800-RED-CROSS.

Wicked Local’s media partner, WCVB Channel 5, is producing a telethon on Aug, 30, in conjunction with our local Red Cross to help raise funds for the victims of Hurricane Harvey. During cut-ins throughout newscasts and afternoon programming, viewers hear what local Red Cross volunteers are doing in Texas, how the Red Cross mission will change in the weeks ahead, and learn how they can provide help for Houston. WCVB’s live phone bank at the Channel 5 Studios in Needham will be staffed by local Red Cross volunteers taking pledges from area viewers. Call 781-433-4009 to donate to the @RedCrossMA. Phone lines open until 7:30 p.m.

Salvation Army, a non-profit organization, is providing food and water to first responders and preparing for massive feeding efforts for residents. The organization is also set up to provide immediate emergency response, long-term disaster recovery help and spiritual and emotional care, according to its website. Those who are interested in donating through the Salvation Army can visit its website, SalvationArmyUSA.org, by calling 1-800-SAL-ARMY, or can mail donations to P.O. Box 1959, Atlanta, GA 30301.

Habitat for Humanity has nearly 25 local offices throughout the parts of southeast Texas and southwest Louisiana affected by the storms. The organization is assessing the shelter and housing needs in areas impacted by Hurricane Harvey and developing response options. Donations can be made online or by calling 1-800-HABITAT (1-800-422-4828).

Catholic Charities USA, the domestic relief agency of the U.S. Catholic Church, is accepting donations online and by phone. Text CCUSADISASTER to 71777 to make a donation.

GoFundMe.com, the crowdsourcing website, has created a landing page for those fundraisers helping victims of Harvey. The options for donating include a disaster animal fund for pets and an effort to provide hot meals to the residents of Victoria. Those looking to help can review the donating options at a special page dedicated to Hurricane Harvey causes at GoFundMe.com. (Warnings have been issued about potential scams.)

GlobalGiving.org, a crowdsourcing network, is asking for contributions for a Hurricane Harvey Relief Fund and has a goal of raising $2 million. GlobalGiving guarantees that your donation will be used for Hurricane Harvey response and donors will get regular email updates outlining how funds are being used.

MAP International, is non-profit that describes itself as a Christian organization providing life-changing medicines and health supplies to people in need. MAP is preparing desperately needed supplies, including thousands of hygiene kits to prevent the spread of diseases that are common following disasters. The kits include soap, toothbrushes, toothpaste and other essential items to help prevent the spread of disease. Each kit is designed to help meet the needs of one person residing in a shelter for one week. More kits are planned.

MAP is accepting donations to provide disaster health kits. Donations can be made online here.

As you think about donating to victims of Hurricane Harvey and the ongoing flooding in southeastern Texas, you want to be sure to to consider who you are donating to. One place to start is Charity Navigator. If you want to help, make sure you donate to a reputable organization. The BBB Wise Giving Alliance offers help in evaluating whether an organization meets the necessary charities standards.