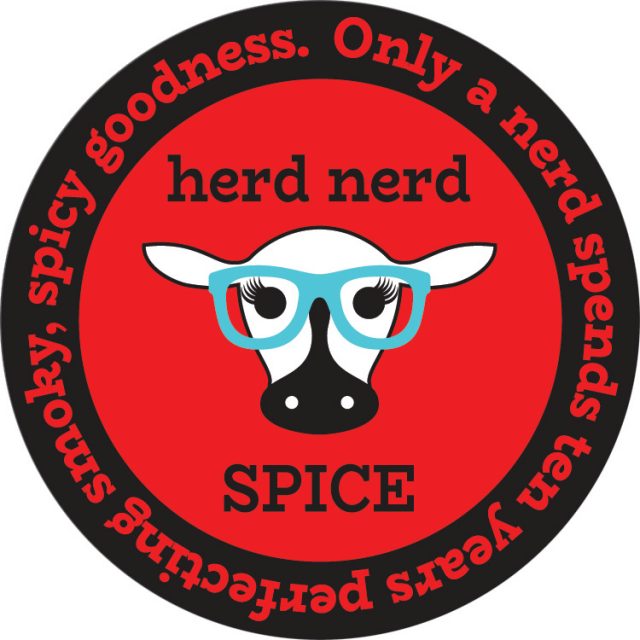 An avid cook with a knack for barbecue, Arlington resident Brad Perriello spent 10 years refining his own spice recipe.

After the spice was a hit among family and friends, Perriello’s wife, Jennifer Wood, decided to release her husband’s creation to the world.

Wood launched Herd Nerd SPICE last fall and has already gotten the product into 11 stores including in Arlington, Belmont, Somerville and Brookline. The product is also sold online.

On its website, Herd Nerd SPICE is described as a “smoky, spicy goodness for your favorite meat, fish or vegetarian soups and stews.” Perriello’s creation is a blend that includes paprika, chili powders and cumin.

“It’s called herd nerd because my husband kept a “top secret” binder of how he refined it,” joked Wood in a phone interview. “I think he started with most of the ingredients that are in there now, but he has tweaked them many times in terms of adding more and less [of one ingredient].”

Although originally made for barbecue, Wood said people are using the spice in a wide array of foods including crab cakes, chicken and salmon. People have also tried and liked it in their Bloody Mary drinks, she said.

With an 8-year-old child and a full-time job as a digital project manager, Wood has had to chip away over the last year, accomplishing a few goals each week to make her husband’s hobby into a business.

She uses the Arlington Art Lounge to make the spice, got her wholesale license in January and had to design the website as well. Wood also worked with one of Perriello’s friends to design the packaging, which she said makes the spice into a great gift.

“This is still a pretty small-batch business,” she said, adding it is labor intensive because she still makes it all by hand. “The volume is still fairly small.”

The spice business is not easy either.

Wood said some stores have told her the product is too expensive because they are buying 10 to 20 different spices in bulk from one company.

Other stores told Wood they would love to carry her product, but are fully stocked with spices and have limited inventory=.

But Wood is happy with the progress she has made and continues to chip away.

“I pursued Herd Nerd SPICE because I have this gut feeling about it,” she said. “I thought the product was really good. I loved the whole concept. Right now, I am focused on continuing to get the word out about it and hopefully it does grow.”

Herd Nerd SPICE can be found at Allandale Farm, Brookline Grown and Foodie Asylum in Brookline.