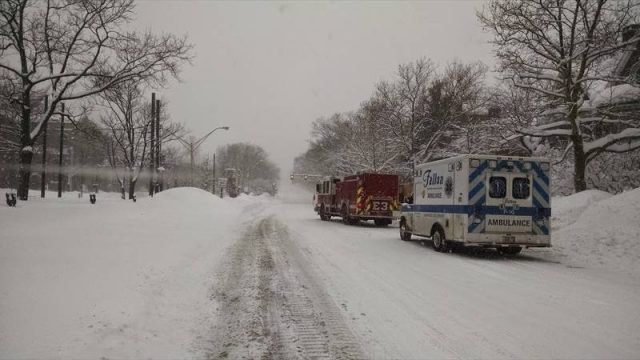 The recent layoffs and contract losses at Fallon Ambulance Service should not affect Brookline, according to Town Administrator Mel Kleckner.

Earlier this month the company laid off 23 staff members – the company said were all administrative — after the company lost a contract with Weymouth. The company is also in talks with Transformative Healthcare.

“Fallon reached out the Fire Department after the layoffs this week were reported,” said Kleckner. And Kleckner then reached out to Fallon’s Vice President Peter Racicot after an inquiry. “Peter has assured me that the layoffs do not impact their direct operations to Brookline and they are confident that there will be no change in level of service.”

Kleckner said Fallon also shared with him a statement that the company made about potential business partnerships or changes.

“Fallon Ambulance Service has been in talks for several months with Transformative Healthcare about Transformative investing in Fallon, but we have no transaction to announce. Transformative is regularly speaking with ambulance service providers throughout our region. We will let you know if and when we have anything to announce,” Racicot said to in an e-mailed statement.

“From where I sit, the Town has a contract with Fallon with clear terms and performance standards. We have had a great relationship and service with Fallon in the past and I expect it will continue. If and when any ownership changes emerge, we will evaluate them and what possible impact it may have on Brookline,” said Kleckner in an e-mail.

Fallon Ambulance has been the ambulance service the town has contracted to work with first responders since at least 2014. The current contract is up in 2019.

A Washington Post reporter wrote about an instance where one man who was was charged more than $2,000, about double what he would have been charged had his insurance company been within the Fallon’s coverage, when he needed a ride to the emergency room from Chestnut Hill. The article highlighted what appeared to be a regular practice to make money.

The Wellesley-Based Transformative Health Care, which owns Stewart and Lifeline Ambulance services, has expressed interest in collaborating with the company. Transformative did not return requests for comment.

Fallon Ambulance Service’s market has been squeezed out in recent years by competing Cataldo Ambulance service and others in the area. Still, Brookline, Dedham and Milton still have contracts.

Owner Timothy Fallon owes more than $561,784 in unpaid taxes from payroll tax and now has liens against his home in Milton and against his home in Rockport, according to obtained documents. Some people took that as a sign of deeper financial troubles at the company.

But Fallon representatives say that is not related to the company or the work it does.

“Fallon Services Inc. receives Federal Medicare funds as payment for services rendered. As a recipient of Medicare payments, the company must routinely receive re-validation by the Federal Government’s Centers for Medicare & Medicaid Services (CMS) every five years. Fallon Services underwent this regular review in November of 2017 and is in good standing. While the owner has a personal financial issue that he is dealing with, and which will soon be resolved, that personal issue has no effect on or connection with the company,” Racicot said in an e-mailed statement.

In early 2017 Fallon was cited by the state for ambulances that did not have the proper reflective tape on them, which has been required by the state for the past decade, obtained documents show. They were also sited for having holes in the floorboard and equipment issues.

Other notations in state review showed, expired needles, a tear in the beach seat, a missing window, and a stethoscope in a 911 ambulance taped together with tape.

“That stuff happens to a lot of services. Whether it’s third service, private or fire based. Expired syringes is on the crews to check equipment. Sometimes it’s just an oversight that happens. When things in the past have been brought to their attention they make the changes needed. I’ve worked in plenty of other places and it’s happened in all of them,” said one person who has worked at Fallon for nearly a decade, but preferred not to be named because he was not authorized to speak on the matter.

“The Department of Public Health conducts inspections to monitor each ambulance service’s compliance with state regulations as part of the licensure process. If a service is found to be non-compliant, DPH works to see that the company corrects the identified deficiencies to ensure the safe care and transport of patients,” a Department of Health Spokesperson said in an e-mailed statement.

During the inspection of an ambulance service, an inspector may find areas where the service is not in compliance with DPH regulations. These deficiencies range in severity, and some may be corrected onsite during the inspection. If an inspector finds a deficiency or deficiencies that are more serious in nature and pose a threat to the health and safety of patients, Department of Health will issue a Notice of Serious Deficiency to the ambulance service that details these findings. Within 10 days of receiving the notice, the ambulance service must submit a Plan of Correction to the Department of Health to address how it will correct the failed marks, there’s another review and, depending on whether the issues are addressed, the department can then issue approval to the ambulance service and continue the licensure renewal process or give them another 10 days to address the issues.

Following its review last year Fallon responded to and addressed what it needed to to get renewed.