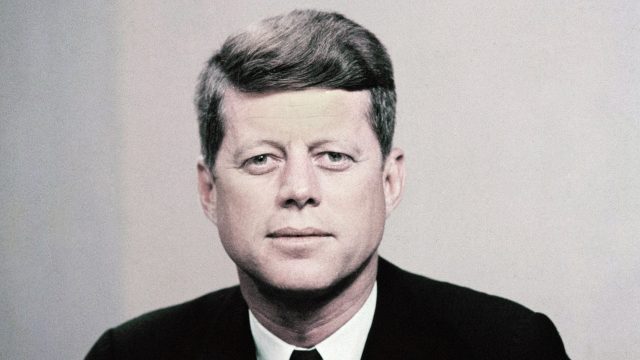 Cape Codders like to claim President John F. Kennedy as their own, but the real bragging rights belong to the people of Brookline.

The future president was born here on May 29, 1917, in a colonial revival-style house at 83 Beals Street, nestled in a dense middle-class neighborhood of stately homes not far from Coolidge Corner.

Just as images of President Kennedy portray him as forever young, his birthplace and childhood home also remains frozen in time.

After Kennedy’s assassination in 1963, Rose Kennedy, his mother, repurchased the property and meticulously restored it to the way it appeared and was furnished in 1917, eventually donating the home to the National Park Service in 1969.

A short stroll from some of the trappings of modern America on nearby Harvard Street — Starbucks, McDonalds, T.J. Maxx and Five Guys — the homes along the quiet side street have aged gracefully during the past century. But one home stands out from the others. With a flagpole and a commemorative plaque in its postage stamp-sized front yard, it was easy to spot the birthplace of the 35th president.

Ranger Jason Atsales explained that “Jack” was born in the home and lived there until he was 3½ years old — he lived in another house in Brookline until he was 10 — and had a happy, yet strict and often sickly, childhood there.

Atsales showed a photo of a 6-month-old Jack, eliciting “oohs and awws” from the two grown men visiting from Cape Cod.

We were told not to touch anything in the house, except the handrails on the stairs.

The home, at first glance, is modest, yet comfortable and inviting.

“A lot of people expect a mansion,” Atsales said. “They (the Kennedys) were middle class when they lived in Brookline.”

The dining room is to the left of the entry hall. It has place settings on two tables — one for adults and one for children — ready for a meal that will never be served. A child’s bowl, monogrammed with the initials “JFK” has been placed on the small table.

The living room, with a piano, Oriental rugs, upholstered furniture and a collection of National Geographic magazines, sits to the right. An early model rotary phone, to be used by father Joseph Kennedy for business calls, is on a small table in the hallway, the papered walls adorned with family photographs. Steam radiators in every room provided heat.

Approximately 20 percent of the furnishings in the home are the original pieces that were there at the time of the president’s birth, according to Atsales.

Atsales explained that the four of nine Kennedy children who were born or lived in the home — Joseph Jr., Jack, Rosemary and Kathleen — said their prayers in the living room. He said Rose Kennedy considered the dining room the most important room in the house, as that was where the children were often engaged in conversation to discuss and be quizzed about the news of the day.

“They didn’t treat the children as children, but treated them as young adults,” Atsales said.

Heading upstairs, we saw the spot where the course of American history was forever changed: the master bedroom.

At approximately 3:00 p.m. on May 29, 1917, Rose Kennedy gave birth to John Fitzgerald Kennedy on the twin bed closest to the window of the street-facing room. Giving birth close to a window would provide more light for the attending doctor.

“It was a type of contraception, a way of preventing unwanted pregnancies,” said Atsales when asked about the sleeping arrangements of the elder Kennedys.

The second floor also featured a nursery, a guest room that would eventually become the girls’ room, and a bathroom with a tub and a toilet, which was a fairly new indoor luxury in 1917.

Jack’s favorite books, “King Arthur and the Round Table” and “Billy Whiskers,” are still in the nursery waiting for him.

One of the most intriguing rooms on the second floor is Rose Kennedy’s office, where she managed household operations and kept detailed health records of the children, handwritten on index cards, in a wooden box on her desk.

Rose Kennedy, according to Atsales, subscribed to regimented “scientific mothering,” even researching how many hugs per day her children should receive.

Jack’s medical card was filled with information. His mother noted that the future president, as a child, suffered from whooping cough, scarlet fever, measles, chicken pox and bronchitis.

Jack was also born with one leg shorter than the other, according to Atsales.

“He was one of our unhealthiest presidents,” said Atsales, adding that during his lifetime, Kennedy received last rites four times.

Despite health issues, young Jack was known for being a charming, yet mischievous, boy during his Brookline years, often known to take milk bottles off neighbors’ stoops and then try to sell them back.

“He (Jack) was often late for dinner, but on time for dessert,” said Atsales, with a smile.

A third floor, which now houses park service offices and is off-limits to visitors, was once used as chambers for the Kennedy family’s two live-in maids.

The tour ended in the kitchen of the home, back on the first floor. Although modern for its day, it’s apparent that the domestic help worked hard to cook meals for the family, having to feed a coal-fired Glenwood range and make sure there was always ice in the icebox to keep food fresh.

The kitchen, according to our tour guide, was a favorite hangout for Jack, who used to drop by regularly to ask the maids for a snack.

A prerecorded message from Rose Kennedy plays in the kitchen, with her recalling the happy days spent at the home, having Boston baked beans on Saturday nights and walking with the children and family dog to nearby Coolidge Corner to shop and visit St. Aidan’s Roman Catholic Church because “church isn’t just for Sundays.”

St. Aidan’s Church, as we would later find out during a walk through the neighborhood, has long since been converted to condominiums and apartments.

The kitchen, at the rear of the home, was the scene of a firebombing in 1975 during the height of the Boston school busing controversy. Twelve years before that, thousands of people flocked to the street for a day of mourning in the days after JFK’s assassination.

“This is not only a president’s birthplace and a site of national mourning, it’s a site where an act of terrorism occurred, too,” said Jim Roberts, the supervisory park ranger at the site.

As young Jack Kennedy’s childhood was playing out in Brookline, a seaside community 75 miles to the south was unaware it would be thrust into the global spotlight in four decades.

“In 1917, Hyannisport was definitely becoming a popular summer and tourist destination,” said Nancy Viall Shoemaker, a historian based in West Barnstable.

According to a 1968 book entitled “Old Hyannis Port,” the village on the south side of Barnstable in 1917 still had a railroad wharf jutting into Nantucket Sound, St. Andrews By-The-Sea had been open for six years, the Hyannis Port Yacht Club Regatta was in its eighth season and grand resort hotels in “the Port” were still in operation. Famous politicians, actors, authors and captains of industry were all becoming frequents seasonal visitors to the village.

Joseph and Rose Kennedy and their family would also become Hyannisport fixtures long before their son became commander in chief, renting a summer cottage in 1926 and purchasing a home there two years later.