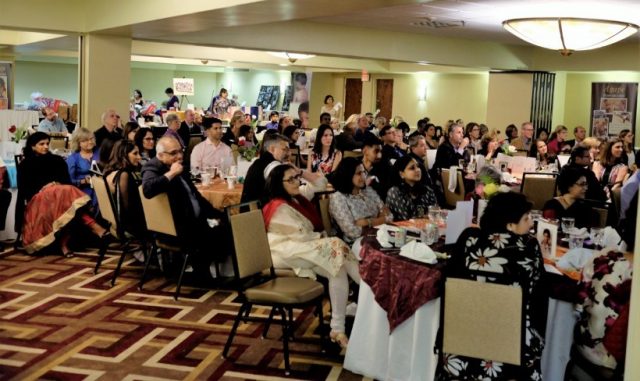 Agape International, a Hyderabad-based organization that takes in orphans with AIDS and orphaned by AIDs, held its annual Fall fundraiser earlier this month at the Holiday Inn in Brookline, MA.

The evening showcased Agape’s success in educating poor, HIV+ children, making them productive citizens. The audience, a mix of Indians and Americans, heard, via Skype, from children who grew up at the Agape orphanage, and now either go to college, or after studying engineering or accounting, have successful careers.

While only 4 percent of poor Indian children go to college, Agape, with its own English-medium school, has sent close to half their high school students to college. A boy, who came to Agape as a poor HIV+ seven year old, now speaks perfect English and works as a chemical engineer. Another speaker was a girl who came to Agape as a child, finished her MBA, and now works for a corporation in Hyderabad.

The interactive session had the audience asking the students how Agape had prepared them for life outside the orphanage, the issues of being HIV+ in a world that still stigmatizes them, and what donors could do to help.

The evening resulted in many new donors, who heard for the first time the work done to help poor children in India impacted by AIDS, generously sponsoring the living and educational expenses of the Agape orphans.

The evening featured an update by Lynne Guhman Agape’s founder who lives in Hyderabad, a silent auction with many items from India being snapped up in a pre-Diwali bidding frenzy, singing by mother-daughter duo Sudha and Krithi Rao, and a fun dance by local resident Priti Saini, who got the enthusiastic audience of Americans and Indians on their feet with a couple of Bollywood numbers.

Agape feeds, clothes, shelters, and provides medication to around 250 children in its Hyderabad orphanage. In addition, Agape also educates the children, all the way from nursery to high school, in its own English-medium school.

Agape is funded by individual donors who sponsor a child’s residential or schooling expenses. You can learn more at agapeintl.org or by emailing joe@agapeintl.org.