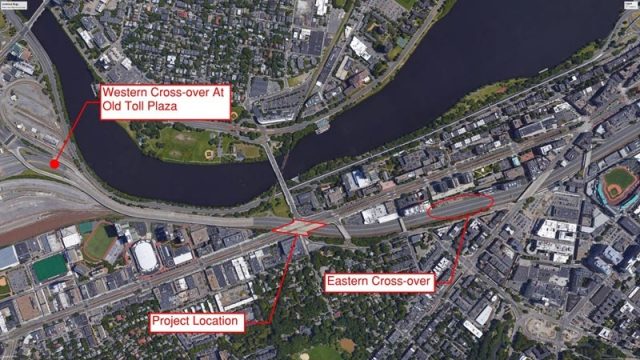 It is happening. Major road closures related to the bridge update in Allston are happening. This weekend MassDOT will reduce I-90 (the Mass Pike) between the Allston Interchange and the Beacon Street Overpass in Boston to two lanes in each direction to conduct a “dry run” of the I-90 traffic logistics for the 2017 Construction Shutdown.

The I-90 Eastbound on-ramp from Cambridge Street and the I-90 Westbound Exit 20 off-ramp to Brighton/Cambridge will also be closed intermittently.

This is for a project that will replace the Commonwealth Avenue Bridge carring the MBTA Green “B” Line over the Massachusetts Turnpike and the MBTA Commuter Rail line in Boston.

The 2017 construction window will take place from Wednesday, July 26, to Monday, August 14. The second shutdown will occur in summer 2018, according to MassDOT.

What about the bridge upgrade project?

Between Wednesday, July 26 and Monday, August 14, these modes of transportation will be impacted in the Boston University/Saint Paul Street neighborhood:

• Commonwealth Avenue eastbound and westbound between Brighton Avenue/Packard’s Corner and Kenmore Square: closed to private vehicular traffic from 7:00 PM on July 27 to 5:00 a.m. on August 14 (two-way access will be maintained for MBTA buses, emergency services, pedestrians, and bicyclists)

• Boston University (BU) Bridge: closed to private vehicular traffic from 7:00 p.m. on July 27 to 5:00 a.m. on August 14 (two-way access will be maintained for MBTA buses, emergency services, pedestrians, and bicyclists)

• I-90 (Mass Pike) between the Allston Interchange and Beacon Street Overpass: lane reductions from 9:00 p.m. on July 28 to 5:00 a.m. on August 7 and intermittent closures of Exit 20 on/off-ramps (2 lanes in each direction during peak period)

• Amtrak’s Lakeshore Limited Line: service impacts for two weekends (July 29-30 and August 5-6) – shuttle bus service between Albany, NY and Boston. MassDOT adds: A key to this success is minimizing traffic volume as much as possible in the area. With that in mind, we are asking abutters and customers to:

• Reduce – Try to schedule your vacation during this planned construction period. Avoid the construction area as much as possible.

• Re-mode – Shift to public transportation, walking, or biking. One side of the bridge will remain open to pedestrians and bicycles throughout the project.