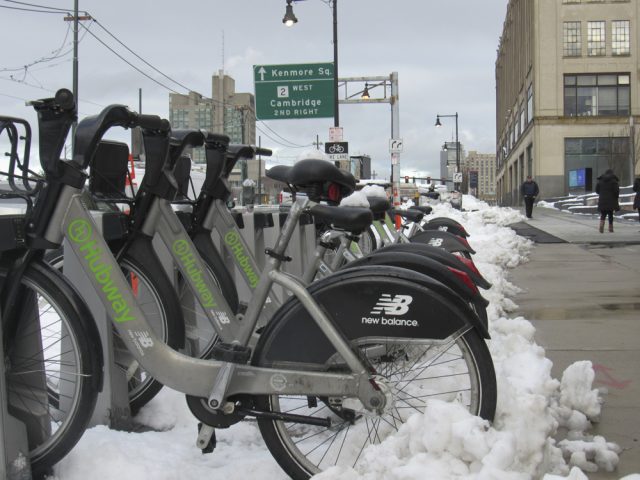 The Blue Bikes expansion plan is the result of a six-year partnership between Hubway and the Massachusetts branch of BCBS which aims to broaden public access to rental bikes in the city.

Amy McHugh, director of media relations for BCBS Massachusetts, said her organization will be contributing nearly $20 million to enhance Hubway’s bike-share service and promote exercise and healthy living in the Commonwealth.

“As a community-focused, tax-paying, not-for-profit healthcare company headquartered in Boston, we’re committed to helping build healthy communities,” McHugh said in a phone interview. “Through this program, we hope to serve as a catalyst to empower our fellow citizens to live healthy, active lives.”

By the end of 2019, an estimated 3,000 “Blue Bikes” will be available in Boston. The existing Hubway infrastructure will gradually be rebranded under the Blue Bikes label over the coming year, according to a press release from the bike-share operator Motivate International Inc.

McHugh said BCBS will reveal more details regarding its Hubway expansion plans in the next few weeks.

“The transition to Blue Bikes will include new bikes, updates to the mobile app and valet services at the busiest transit locations,” McHugh said. “We’ll be adding an additional 1,200 bikes.”

McHugh said she hopes the Blue Bikes service will encourage Boston residents to choose biking over other methods of transportation that have a larger carbon footprint. By expanding bike-share services to different communities in Boston, she said Hubway and BCBS aim to make the city more accessible to its residents.

“Bike-share programs are an affordable, environmentally friendly transportation option that encourages people to incorporate exercise into their day-to-day lives,” McHugh said. “By adding over 100 new stations and supporting a robust discount fund, we hope to engage riders in communities that previously did not have the opportunity or access to participate in bike sharing.”

Dave Anderson, 51, of the South End, said he thinks the Blue Bikes expansion will allow for easier access to less-traveled areas of the city.

“I’m an active guy and use my own bike regularly, but I think all residents should be able to have access to bikes as a way to get around and stay fit,” Anderson said. “The T certainly doesn’t go everywhere you need to get in the city and more rental bikes and stations means more access to different parts of Boston.”

Blue Bikes, like Hubway, will serve as a public transportation service under the management of the local government in Boston and other participating cities, including Cambridge, Brookline and Somerville. Boston Mayor Martin Walsh announced his support for the Blue Bikes program and his enthusiasm regarding Hubway’s partnership with BCBS.

“The Hubway bike share program began in the city of Boston in 2011 and quickly became integral to our transportation system,” Walsh said in the release. “… I am delighted to welcome Blue Cross Blue Shield as a partner as we further develop our bike share program and I’d like to thank them for helping us to make this resource available to additional Boston residents in their own neighborhoods.”

Local trucker group, the Trucking Association of Massachusetts, spoke out against the expansion this week, noting safety concerns for bikers and liabilities for truckers who are unable to spot bikers in their blind spots.

Evan Daniels, 60, of Fenway, said as a former truck driver, he remembers feeling nervous when bikers were on the road. He said he anticipates that the increase of bikes in Boston will cause more collisions and serious injuries for riders.

“Trucks have huge blind spots — much bigger than cars,” Daniels said. “So, when you got bikers on the road coming up beside you and you don’t see them, that’s a dangerous situation for everyone involved. And these are busy streets in Boston — not friendly to bikers. Bikes are great, don’t get me wrong, but Boston just isn’t great for bikers.”

But not everyone agrees.

Denise West, 56, of Back Bay, took a break from biking along the Charles River Esplanade to explain to The Daily Free Press why she thinks the bike-share system is important to Boston’s transportation industry.

“Bikes are such a convenient and healthy way to get around the city,” West said. “Hubway already brings in great revenue to the city, decreases congestion on the roads by encouraging people to bike instead of drive and it should do even more of those things when the service expands to create more stations and add even more bikes for residents to use.”