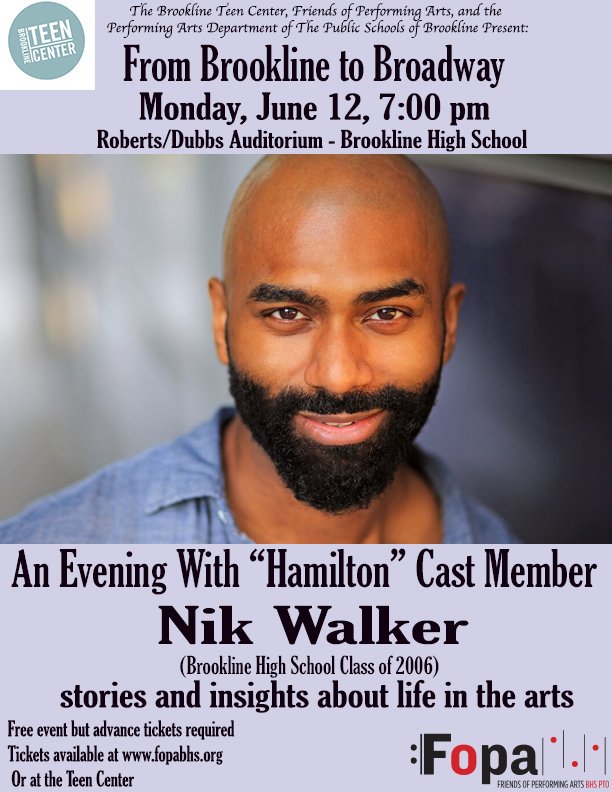 Walked disclosed insight and anecdotes, reminding the audience of the evolution and hard work that it takes to continuously become a better performer. Walker answered questions from performing arts teachers, Summer Williams, Mary Mastandrea, and Mark VanDerzee, all of whom were teachers of his while at BHS. He also took questions from audience members including, one stretch where he and two young students exchanged lines from Hamilton.

During his time at BHS, Walker performed in a variety of musicals and plays; he credits BHS and these experiences to helping him flourish as an artist. Walker’s first BHS play was “Antony and Cleopatra”, in which he performed alongside upperclassmen.

Walker paid tribute to the BHS Performing Arts program and its incredible teachers by saying, “I was so blessed to start my performing arts education in the Brookline Public School system. I cannot begin to tell you how deeply each of the Brookline Performing Arts departments shaped my drive, my artistic comprehension and style; they taught me the importance of finding my own voice, instead of chasing others’, of working within the community to serve the community. Every play or concert I did here was a free master class in critical thinking and expression, and each teacher left their indelible mark on me in ways I am still discovering today.“

During the evening, Walker explained how he moved from high school theater, to local theater, to regional theater before making it to Broadway. He shared how teachers at Brookline High School, including Williams and VanDerzee, two of the founders of Company One Theatre in Boston, supported his growth.

“[Company One] changed my life, because not only did I see the kind of theater that I wanted to make, but I also saw what it took to make that kind of theater,” Walker said. “I wanted to be in a position when I got to New York where literally the only thing that was going to stop me from doing this would be me.”

On the regional circuit, Walker performed in “Miss Saigon,” “Yoshimi Battles the Pink Robots” and more, making appearances at places such as the La Jolla Playhouse in La Jolla and The Old Globe in San Diego, California, as well as the Denver Center in Colorado.

Kenny Kozol, K-12 Performing Arts Curriculum Coordinator of Public Schools of Brookline, who emceed the event, commented on the goals of the high school’s programs, “Really our performing arts program here at the high school and at the elementary schools is not about the people who necessarily go to work on Broadway or in film or in major dance companies or play music around the world, of which we have many, but it’s about all people realizing their creativity; having a chance to make music, to participate in drama, to participate in dance because this a part of the human soul and a part of what keeps us ticking as people.”