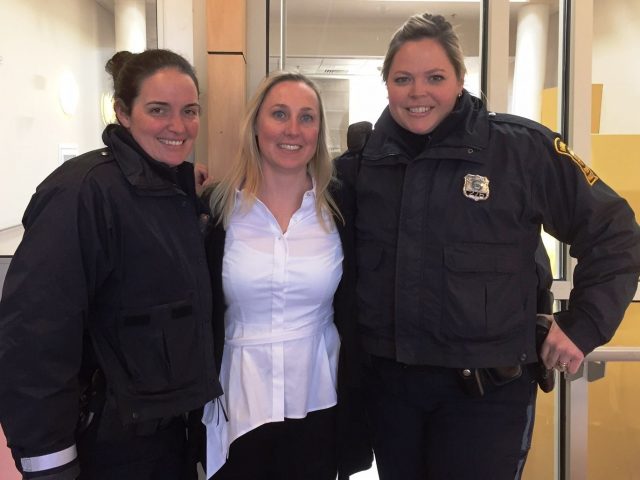 If the answer is “yes” or even “I’m thinking about it,” then you will want to read up about these three female officers who are actively involved with our children in the Brookline Public Schools.

If you are just joining us, we have been celebrating National Women’s History Month by featuring many of the female members of the Brookline Police Department Team.

“Officer Katie,” as she is affectionately known to her students, has been a police officer in Brookline since 2001. She was born and raised in Brookline, attended the Heath School, Mount Alvernia High School and Pine Manor College. While working the overnight shift in the Patrol Division, Officer McCabe went back to school and earned her Master’s degree in Criminal Justice Administration from Western New England University. Her love of children, friendly disposition and excellent communication skills made her an easy choice for the D.A.R.E. Officer assignment in the Community Service Division in 2006. Officer McCabe has maintained her position in the schools despite the changes in the curriculum, which has grown from enlightening students on the dangers of alcohol, tobacco and narcotics to engaging children in educational discussions on healthy relationships, bullying and internet safety. When she’s not in the classroom, you can find Officer McCabe at Brookline Recreation R.A.F.T. dances, assisting the Department’s semi-annual Firearms training, or waving her arms at the intersection of Dean Road and Clinton Road before and after school.

*Forgive us if we are not ready to call her Detective Keaveney just yet- Detective McDonnell was married less than a month ago and we are suspicious of name changes around here.

Detective McDonnell joined the Department in 2005, two years after graduating from Assumption College and 6 years after graduating from Brookline High School. She holds a Masters degree in Criminal Justice from Curry College. She was assigned to the Patrol Division until 2012, when she was appointed to the Detective Division as the Domestic Violence/Juvenile Officer. Detective McDonnell investigates all crimes involving juveniles and makes herself available to members of the Department, as well as members of the public, for consultation on handling juvenile offenders and young persons with problems. She also investigates all incidents of domestic abuse as defined by M.G.L. c 209A abuse law as well as the majority of sexual assault cases handled by the Department. Whereas the majority of Detective McDonnell’s cases involve juveniles or sensitive information, you won’t see a lot of information about her work in the press, however, her personnel folder is packed to the brim with thank you letters from parents, commendations from Chief O’Leary and letters of praise from the Norfolk District Attorney’s Office. In 2015 Detective McDonnell received an award from United States Attorney’s Office District of Massachusetts for her work on U.S. v. Miriam Kizzie and Anthony Pledger.

Officer Conneely came to us in 2006 and has spent her 10+ years in the Patrol Division. Officer Conneely is currently assigned to the day shift in “Sector 5/6” which means that if a call comes in for Brookline High School, Runkle Elementary School, Heath School or Maimonides School, Officer Conneely will likely be the first one to respond. Officer Conneely is a certified R.A.D. instructor and a valued member of the Department’s Crisis Intervention Team. One of her favorite parts of her current assignment is the fixed post at Brookline High School, where she is able to greet students each morning and make herself available to those who need a little extra help.