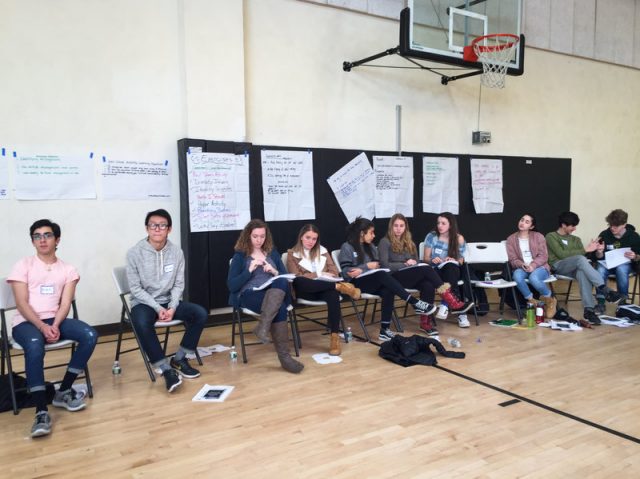 Hate incidents can happen anywhere: the mall, the church, the office. But, in the wake of the 2016 election, hate’s been showing up a lot in school.

According to the Southern Poverty Law Center, in the months following the election more hate incidents took place in America’s schools than anywhere else. Hundreds of elementary, middle and high schools have played host to an array of troubling events, from sophomoric stunts to much worse: a hijab pulled off a Muslim student, physical fights with racial epithets flung, even violent threats.

Educators in Massachusetts, as elsewhere, are struggling with what to do.

In Medway, a video began circulating showing a student with a rifle, saying the N-word and “kill ’em all.” This was just one of dozens of school incidents called in to a hate hotline set up by the Massachusetts attorney general.

One concerned parent called to ask about getting a restraining order. The staffer answering the phone explained the law and promised to follow up to make sure school and local law enforcement officials were taking it seriously.

“It’s especially concerning that a child was responsible,” the staffer offered sympathetically. “And this is exactly the reason we started this hotline, so we really appreciate you taking the time to call.”

But along with the anxious parents, schools themselves are also calling with their own concerns about how to handle it all.

As Attorney General Maura Healey puts it, when it comes to student behavior, “there’s right and there’s wrong.” But it is not always as clear what crosses the line, legally. 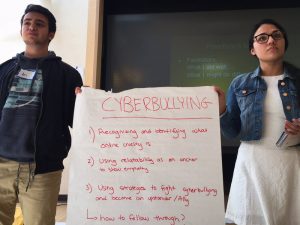 “There is speech that may be ugly, that may be hateful, that may be harmful, but that may nevertheless be protected in certain instances,” says Healey. “So schools have reached out to our office for assistance, and we are here to help them.”

A high school in Attleboro called for help after finding pro-Trump graffiti in the boys’ bathroom. It included a warning about how the KKK would “handle” African Americans — again using the N-word.

“This one was one that they don’t teach you in Administration 101 classes,” says Attleboro High School Principal Bill Runey. “There’s no playbook for this.”

Indeed, many schools are figuring it out as they go. They are grappling with how to prevent and respond to incidents, often under enormous pressure and amid public outcry. Some have come under fire — and investigation — for failing to report incidents. Administrators say they have to strike a delicate balance between being transparent and not giving offenders undue attention or provoking copycats.

But Massachusetts Teachers Association President Barbara Madelonie says some schools are bungling cases because their first instinct is to avoid making headlines.

“I have seen administrators seem to want to run away from the issue,” Madelonie says. “I think people are sort of back on their heels. They get caught up in a sense of ‘I’ll take care of this’ — and that’s troubling!”

Stoughton High School recently took heat for being too soft on a student who hung a swastika at school — and too tough on the teachers who spoke out about it.

One teacher was suspended for 20 days after calling a college to withdraw her recommendation for the student. Teachers are allowed to revoke a recommendation, but they must also follow strict rules about discussing student misconduct.

Superintendent Marguerite Rizzi would not speak specifically to that case, but in general, she says, the district takes very seriously both student misconduct and student privacy.

“It is a complicated balance,” she says. “But I do have to step in and make sure that everyone’s rights are protected, even a person who has engaged in behavior for which they are punished. There are still rights that they have.”

Schools especially, Rizzi says, must strike a balance between punishing offenders and educating them.

“You want somebody who has done something, let’s say, really stupid at the age of 16 or 17 — when they’re 18, to say ‘Oh my gosh, I would never do that now!'” says Rizzi. “They’re going to be among us, and if they haven’t learned something, then they’re just angrier people when they come out than when they went in.”

One of the gold standards in teaching tolerance is a program run by the Anti-Defamation League called “A World Of Difference.” The number of schools calling and asking for the program has jumped five-fold recently. Brookline High School reached out after being hit with two incidents of racist and anti-Semitic graffiti. Administrators recruited 30 students to go through three full days of training — to learn to run tolerance workshops for their peers.

“Ok, folks! Showtime!” bellows the ADL’s New England Senior Training Consultant Rob Jones from the front of a gymnasium. His dreadlocks swinging out from under a felt fedora, Jones bounces around the circle of students, grilling them on what they’ve learned from the exercises they have done so far and getting them ready to be leaders instead of participants. They begin by practicing how they will introduce themselves to classmates when they run a workshop. 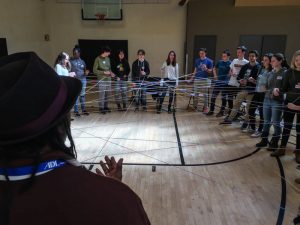 “My name is Josh Gladstone,” starts one. “I’m doing this program because I have seen many issues at the high school, and even though we attempt to have a couple of assemblies, I don’t think it’s enough.”

The students role-play and rehearse everything from ice-breakers to exercises meant to encourage empathy and bystander intervention. Jones coaches and corrects. “You don’t wanna preach,” he tells one. “You do not wanna come off as better than [them]… like you really need to help them. We’ve all laughed at jokes we shouldn’t have laughed at and made comments we shouldn’t have made. We’re all trying to learn together.”

Indeed, even in their left-leaning “bubble” — as some Brookline students call it — they have seen an uptick in hate.

Junior Talia Vos, who moved to Brookline from Mexico, says she felt it the day after the election. She was in the hallway between classes and yelled out to a friend — in Spanish — to save her a seat.

“A group of boys behind me, they started chanting, ‘build a wall!'” she recalls. “It’s just these new social norms of how we treat each other.”

After 30 years of doing this work, Rob Jones worries that many of the communities that need these programs the most are also in denial. 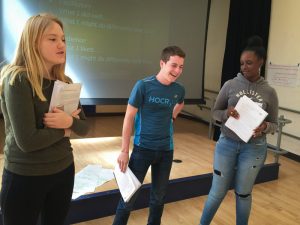 “Certain populations just won’t talk about it because they don’t get it — they don’t get it,” he says. “They’re like, ‘we don’t have any issues.’ But boy, they have a lot of bigoted behavior.”

Along with prevention, many schools these days are also quickly learning the art of “the healing response.”

In Brookline, after the hateful graffiti was found, students banded together to re-paint the table that was vandalized to “reclaim it from hate.” Other schools have called in professional facilitators to moderate a “community conversation.”

Following the KKK graffiti in Attleboro, dozens of students mobilized to counter the hate with kindness. They wrote “love notes” to each of the high school’s nearly 2,000 students, staffers and teachers.