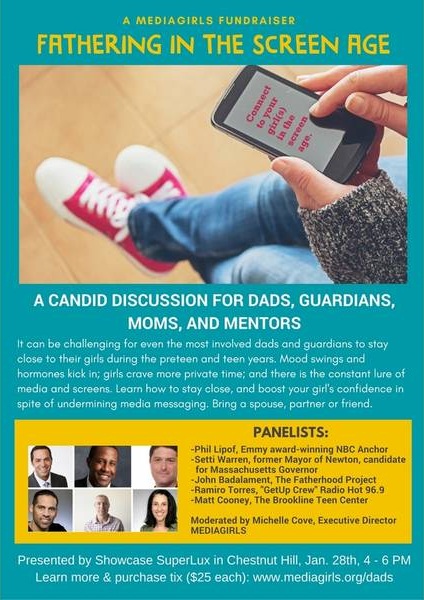 From Media Girls: MEDIAGIRLS announced that it is hosting a panel discussion aimed to bring together fathers and male guardians to talk about how to stay connected with their daughters in the screen age. Half of all teens say they are addicted to their technology devices, and depression among teen girls is reportedly on the rise.

“We know it can be challenging for men to stay close with their daughters in the adolescent years,” said Executive Director Michelle Cove. “As girls spend increasingly more time on their devices, dads can feel pushed aside. We want to give them specific strategies for staying connected, especially given that social media can leave girls feeling anxious and lonely.”

The event is open to the public. Attendees can arrive at 3:30 p.m. for the opportunity to enter a raffle for father-daughter experiences donated by local shops and restaurants at The Street. MEDIAGIRLS will share film and TV clips of dads and teen girls, and the panel will talk candidly about their own experiences in raising girls. Specific tools will be provided to help attendees build stronger relationships with the teen girls in their lives.

Tickets are on sale here, and all proceeds go directly to bringing MEDIAGIRLS programming to girls at low-income schools in Boston.