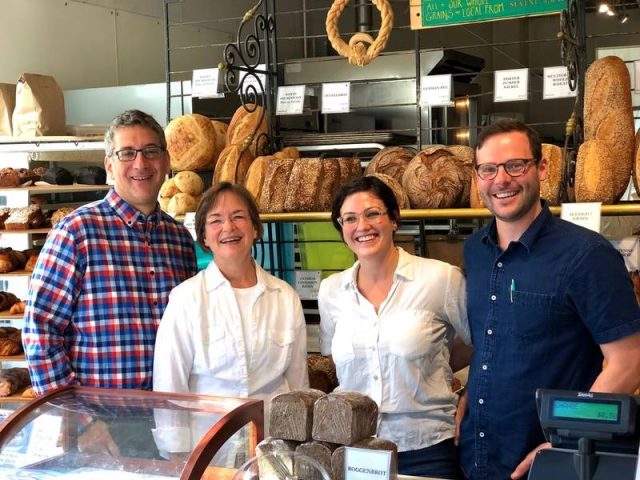 Clear Flour Bread has been in business for 35 years this October. Throughout that time, husband-and-wife owners Christy Timon (who founded the bakery) and Abe Faber have celebrated countless holidays at the bakery. They have cross country skied into work in snow storms and had to wake up at 3:00 a.m. to fix broken machinery. But there is a major change that is about to happen next month. The owners are stepping aside, and two new Brookline faces will be taking over the business.

It is the end of an era in many ways. But the legacy that is Clear Flour Bakery will continue, they say.

The bakery, where it is not unusual to see a line out the door – even in the winter – as folks wait to grab fresh, artisan European breads and pastries, will stay much the same. The name will not change. The way the breads are carefully crafted and the holiday offerings will stay the same. Even the staff will remain, according to the owners. In fact, Timon, who founded the bakery, and Faber will stick around for a year as they mentor the incoming owners, a young couple who live in Brookline, as they take over the neighborhood bakery tucked near the corner of Thorndike and Lawton streets.

“We didn’t plan this at all,” said Faber. “He’s this kid who grew up and loved going to the bakery,” he said of new co-owner Jon Goodman, who will take over with wife Nicole Walsh. “The young blood could afford to start their own bakery, but they’re all about furthering the bakery and its legacy,” Faber said. 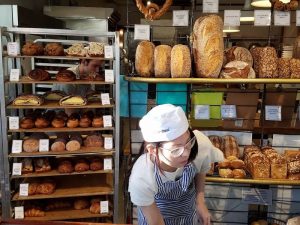 Faber and his wife thought they would be the bakery’s owners for the rest of their lives, modeling their life plan after the traditional shops in Europe where they modeled their bread recipes and technique. But the couple’s 23-year-old twins are not interested in taking the baton, and a number of small family matters have come up, he said.

And it became clear it was time to retire. “This is the next best thing. But it’s like giving up your firstborn child. It’s a pretty intense thing,” Faber told Patch Tuesday.

There is a lot about the last three and a half decades the outgoing owners are proud of.

“I like that we’re making real food. I’ve been training people to do something that’s a profession since man started making bread,” said Timon. “It’s an element of basic nutrition and sustenance. It’s honest. I’m proud of being able to do that.”

And speaking of training, Timon and Faber have mentored and helped inspire the next generation of artisan bakers to do similar quality work in different parts of the country.

Standard Baking Co. is one of Maine’s most well-known bakeries. Alison Pray opened shop in 1995 with her husband, Matt James, and the duo both worked at Clear Flour first. Another alum went to Doylestown, PA and started Cross Roads Bake Shop, and current baker Daisy Chow has been working on starting her own Breadboard Bakery. And there are more, said Faber.

“There are people all over the country. What’s so cool — besides that it makes us feel old — is that people will look to us as mentors then we get excited about what they do and we trade back and forth,” said Faber.

It is that excitement at finding new ways to make traditional breads or treats that have fueled the duo all these years. And it may be why the bakery is consistently on the top of the Best of Boston’s list. And why so many quality bakers emerge after stints at the bakery to create their own renowned bakeries. 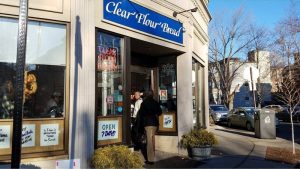 And it is that same quality that has Timon fixing to make a couple more things to sell at the bakery before she leaves.

“I haven’t made everything I wanted to, yet” she said.

“I just remember looking at when it was in the case in a bakery in New York thinking ‘how do they do that?'” she said of the Italian pastry. She’s got it. And it’s coming soon, she said.

In October of 1982 Christy Timon, then 29, leased a space at the corner of Thorndike and Lawton Streets with the idea of opening a catering business with her business partner. Their digs in Newton had gotten too small, so Cafe Small Caterers moved to Brookline. Timon, did not expect it to last forever, it was just something to make money while she geared up for a career as a ballet dancer.

Timon was known for her bread. She had had an old friend who had given her some sourdough starter and it spurred her interest in bread making. It wasn’t uncommon for clients to inquire about the bread, and eventually restaurants started requesting her bread. One thing lead to another and the caterers business turned into a wholesale bakery.

Faber came on the scene after meeting her through a friend originally to help make deliveries in Timon’s grandmother’s old Chevy Nova in 1983. He eventually became her husband, business partner and “trusty sidekick.”

Clear Flour Bread was named for a milling term. The duo did not have enough money for a sign, so folks in the neighborhood knew them mostly as “Sorry, Sold Out,” for the cardboard sign they would pop into the window at appropriate times.

The bakery evolved through Timon and Faber’s continued training from French, German and Italian master bakers, and through sharing with colleagues in the field. It became an award-winning national standard bearer and training ground for the locally made artisan baking movement. They even got a sign.

Oh and what about that career in ballet?

Timon said she doesn’t regret the move. “This is as physical and as challenging as that was. And every day when we all work together it’s kind of like an ensemble piece,” she said.

Jon Goodman’s family and Faber’s family had mutual family friends and actually knew each other for years. One day Goodman’s mom asked Faber and Timon if they’d be willing to chat with her son and his wife who were considering opening a bakery in San Francisco where they lived.

The owners of Clear Flour Bread understandingly have had a lot of people asking to pick their brains about bakeries. They’re natural mentors and enjoy it. But there was something different about Goodman and his wife. They both had the chops, the inspiration and the skill to do something very similar to what Clear Flour was doing, he said.

Nicole Walsh graduated from the Culinary Institute of America, first began baking at 17 when she managed and eventually owned a cupcake shop in Eagle, Idaho. She moved to San Francisco and spent a decade in the Bay Area refining her craft and vision for the future.

She met Goodman, and it was a match. He had years of bakery management and operations experience to the table, and shared Walsh’s passion for creating, selling and consuming great baked goods.

Their story and interest in crafting artisan breads was a refreshing change from the number of representatives of franchises who had given their cards to Faber over the years. The two’s focus on baking skills and education, purity of whole ingredients, and respect for traditional methods wooed Timon and Faber.

“Out of all the offers over the years, we’ve always just wrinkled up our noses and said no, we’re going to do this ’til we die, just like the old couples do in Europe” said Faber.

But at some point in their months-long conversation, Goodman and Walsh decided they might want to come back to Brookline. And Faber, who had at one point commented to Timon that it was too bad these two weren’t among the ones who would come knocking about their business, slid out a passing comment about taking on Clear Flour.

And that was that.