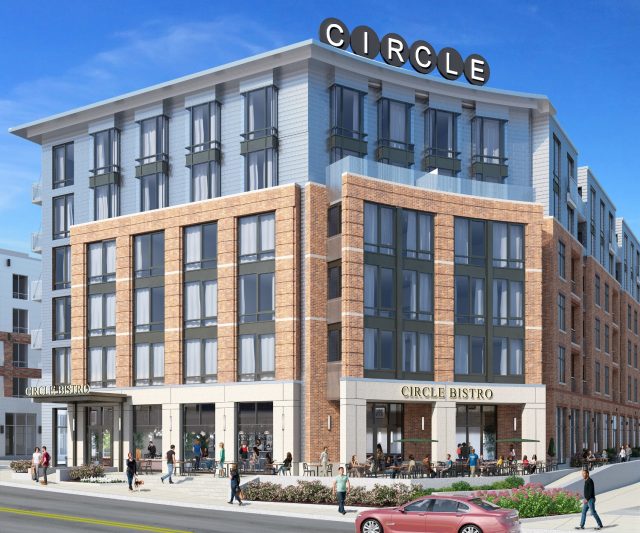 Not everyone may have a fond memory of Circle Cinema once a focal point of Cleveland Circle as a popular spot for cheap Tuesday flicks or first dates, but most will remember the sign that spelled out “Circle” in round letters 7-feet tall atop the boxy building.

When the cinema closed and redevelopment of the property that straddled both Brookline and Boston began, two community members mobilized, determined not to lose the old sign in the transition. They argued the sign, taller than most pro basketball players and made up of the six letters that spell “Circle,” was something historic, a landmark and a sentimental throwback to another time worth preserving.

As the developer held meetings in Brookline and in Boston he got the message:

“They told me ‘This is our neighborhood CITGO sign. It’s iconic and it’s kind of a marker for the neighborhood,'” said National Development Managing Partner Ted Tye.

Tye, himself a fanatic for old signs as evidenced by the remnants of them gracing his office, said he loved the idea of restoring the Circle sign. He wanted to bring it back in working order and give it the kind of prominence it had atop the old cinema, but also work to make sure it looked like it belonged with the new six-story building.

Now, he says, the work is done. This week, as the construction for the buildings wind down, a crane lowered the sign into its final resting spot and then workers covered it with a giant tarp.

On Sept. 13 the iconic sign that stood atop the Circle Cinema in Cleveland Circle will be unveiled at a ceremony across the street. Boston Mayor Marty Walsh, Brookline town officials and Tye will be there to watch its unveiling.

Though Tye says he’s pleased with the new sign, it wasn’t easy to get it up and running again.

“It took a lot of work,” he said. “When we took the old letters off [the old building] they were in really, really bad shape.”

Tye went on to say the renovation, which he estimated cost around $250,000, was akin to when the Citco sign was taken down and put back up. To bring it back to life, it took almost a complete rework.

“I would call it new and improved,” he said. It has the same look and same size as the old sign, but it’s made to last for many years, complete with (working) LED lighting and steel buttresses meant to keep it upright in the wind that wooshes over taller buildings.

The Circle Development includes a 92-apartment independent living community for seniors called Waterstone at the Circle, and a 162- room boutique hotel AC Hotel by Marriott at the Circle and two spaces for new restaurants. Tye said at at least one of those were already spoken for and he planned to announce those shortly. There’s also parking for 188 cars.

In 2014, the Boston Redevelopment Authority approved the $85 million redevelopment project, which straddles the Brookline/Brighton line. And the Brookline Zoning Board of Appeals and the BRA gave their thumbs up in 2015.About a half an acre of the project sits in Brookline and some 81 of the hotel rooms would be on the Brookline side. Neighbors were originally concerned about elements of the design of the side of the building that faced them across the MBTA’s Green line T tracks.

The project was developed by National Development, known for its high profile projects in Greater Boston, including Ink Block in the South End (where Tye just finished placing the old Boston Herald sign when they demolished the old building there). EPOCH Senior Living joined as a partner and operator of the senior housing portion of the project. Colwen Hotels, a hotel firm, will be the operator of the AC Hotel by Marriott at the Circle. Boston Development group is a co-developer of the property.

“We spent a lot of time on this. It’s an unusual project because it had to be permitted in both communities and there was an equal amount of input from Boston and Brookline. In the end too much input can have a bad result, But I think we ended up with a really good building that relates well to Brookline,” said Tye, calling it a game changer and general improvement to the area.

When it opened the Circle Cinema was considered one of the best places to see a movie in Boston and served as a popular hub for years, according to media reports. When the theater closed in 2008, an agreement was signed with its then-owner National Amusements to redevelop the property.

The Circle Cinema site sat empty for about seven years, although the Applebee’s restaurant only closed in 2015. Before it was an Applebee’s it was a Ground Round and a Howard Johnsons.

The building was originally built in a type of art deco style in 1940 as an exhibition hall with a single screen, according to the online site Cinema Treasures. In the 1960s, the theater was redone by architect William Riseman, in a brutalist style similar to Boston City Hall.

It appears the sign on top of the building dates back to the ’40s when it first opened, according to Ken Liss, from the Brookline Historical Society.

“There’s a picture of it atop the marquee in an October 12, 1940 Globe article about the theater’s official opening on that date,” he said.