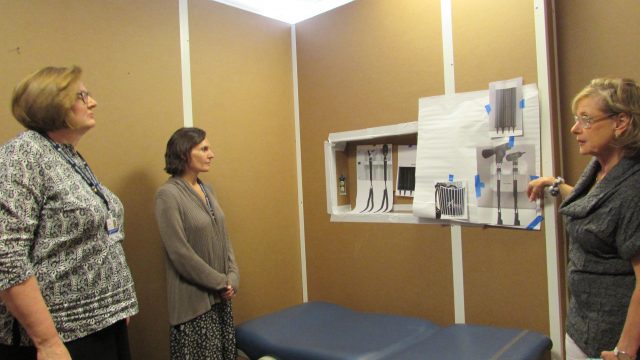 Over recent years, Children’s Hospital has faced an acute problem: there simply is not enough space for patients.

In order to alleviate the issue of overcrowding and improve overall patient care, Children’s will be constructing an eight-story building at 2 Brookline Place for clinical space, as well as a six-story addition to the existing medical building at 1 Brookline Place for administrative purposes. Both construction projects are scheduled to be finished in the summer of 2020.

On August 3, Children’s hosted an open house for its employees to see cardboard mock-ups of medical offices, exam rooms, recovery rooms and reception desks in the Brookline 1 building. These rooms will eventually be located in 2 Brookline Place once built.

“Having the flexibility of the cardboard and being able to move things around is great,” said Lisa Hogarty, senior vice president of planning and development at Children’s.

As they walked through the rooms, doctors, nurses and assistants were able to give real-time feedback to the planners and architects behind the project. For example, one concern expressed by Taryn Sferrazza, the program coordinator at the neurodevelopment center, was that children might bump their heads beneath the sink.

Overall employees had a positive reaction to their new workplace.

“This looks beautiful. You guys have really crossed your T’s,” said Sferrazza.

The planners collected input on everything from the heights of the chairs to the location of the cabinets, all with the intention to enhance patient care and flow.

“We opened it up to the entire Children’s community for feedback and critique. The architects and design team will then synthesize the feedback and update the planning document,” said Hogarty. “The clinical space has to reflect hospital standards.”

They also invited patient families to the open house, as they make up a critical piece of the design process.

“We used to do it with 3D computer imaging, but the doctors and nurses wanted to know what it would feel like to actually be there,” said Hogarty.

Children’s had been planning to expand into Brookline Place for several years, but it was not until 2016 that the Massachusetts Public Health Council approved their Determination of Need proposal.

Children’s had owned the medical buildings at Brookline Place for the past decade. Located only half a mile from the Longwood Avenue location in Boston, it seemed like the perfect place to expand.

“There is tremendous pent-up need in the Longwood Avenue and Waltham locations, and only limited space,” said Hogarty. “Many of the buildings [in Boston] were built in the ’60s or ’70s and they really need to be modernized. Adding space in Brookline frees up the ambulatory space in the Boston location so it can be upgraded.”

In 2009, the hospital received a permit to tear down 2-4 Brookline Place, but the project was put on hold because of the cost of building a new parking lot and the economic crisis at the time. The planners at Children’s presented a revised proposal at a Town Meeting in spring 2014, and members voted for the project to advance.

At the moment, Children’s is building a new parking lot at Brookline Place, which will be completed in January 2018. Once the parking lot is finished, construction on the buildings will begin.

The clinical space at 2 Brookline Place will include a neurodevelopment center, a pain rehabilitation center, ophthalmology, psychiatry, recovery rooms and dental. The departments are laid out so that collaboration between doctors will be smooth and efficient.

Children’s has worked closely with the town of Brookline throughout the planning process, taking into account concerns brought up in town meetings.

Some points of collaboration include the planning of the retail and green space near the T stop, as well as a new traffic signal at the corner of Pearl Street and Washington Street.

“It was never easy access for existing patients,” said Hogarty. “We’re excited about our partnership with the town of Brookline. The overall infrastructure improvements in the area will be great.”

“The ground floor [of 2 Brookline Place] will have retail and places to eat — not just for the hospital, but also for the people coming off the T station and the rest of the Brookline community,” said Jane Venti, the executive director of satellite administrative operations.

The developments at Brookline Place also aim to improve the overall visual appeal of the area. The hospital plans to create a green space in the area across from the Brookline Village train stop and a rain garden between the buildings.

“Patient access and ambulatory spaces are our primary concern,” said Venti. “These developments will provide a better experience for the patient.”