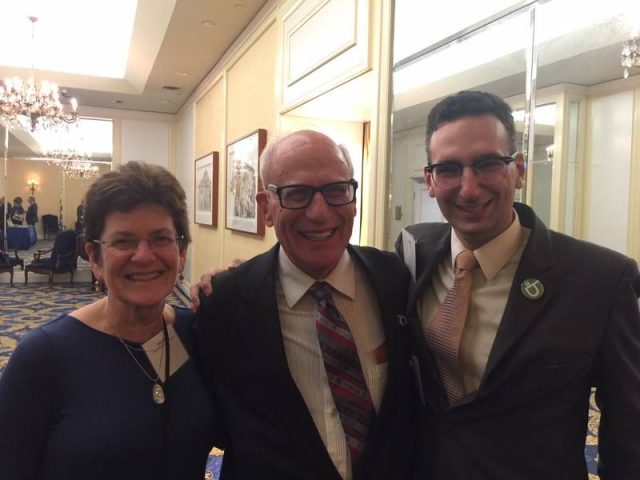 When State Rep Frank Smizik announced he would be stepping down after some two decades representing Brookline in the 15th Norfolk District, the question remained: Who would fill his seat?

So far, one man has officially put his hat in the ring for that job: On December 26, 2017, Brookline Town Meeting Member and Constable Tommy Vitolo formally announced his candidacy for the Massachusetts State House of Representatives.

“Now more than ever, Brookline needs a tireless advocate on Beacon Hill,” Vitolo said in his press release. “Our next State Representative will have big shoes to fill.”

Smizik announced last week he would not run for re-election in 2018. Smizik ran largely unopposed each term until 2014. But it looks like Vitolo may have some company when he runs. Someone close to Town Meeting Member Michael Burnstein’s campaign said he hadn’t ruled out a run, and some close to former Selectwoman Jesse Mermell indicated she might be considering a run, too.

Vitolo said that he wanted to build on Smizik’s legacy noting he was uniquely positioned to do so, after working closely with the representative for years as his treasurer.

“For me, that means expanding opportunity for our families and championing progressive values, from promoting social and economic justice, to supporting our educators and students, and protecting our environment,” he said in a statement.

Vitolo lives near Brookline Village with his wife Jennifer and their two children.

He has served as a Town Meeting Member since 2007 and Town Constable since 2010. He is a senior associate at Synapse Energy Economics, a research and consulting firm specializing in energy, economic, and environmental topics for public interest and governmental clients. Vitolo is a PAX board member, a member of Town Meeting’s Green Caucus and Recorded Vote Coalition, an elected Democratic Town Committee member, active in the Progressive Democrats of Massachusetts’ Brookline chapter, and served as Representative Frank Smizik’s treasurer.

The Massachusetts State House of Representatives is the lower house of the Massachusetts State Legislature. The House has 160 members, who each represent one district. Primary responsibilities of a house representative include, developing budget packages, making taxation decisions, passing legislation, allocating spending, and redistricting in collaboration with other house members and the state senate, according to a description for the job online. The house has the exclusive authority to impeach state officials, who will then be tried by the senate. A house member serves a two-year term, with no limit on the number of terms served. The salary of the position is approximately $60,000 per year in addition to per diem for every day in session.

The window to file papers with the state for the position opens February 13, 2018 and those interested in running have until May 1. The election is not until November 2018. Vitolo will need 150 signatures to run for State Representative. Vitolo’s campaign treasurer is Town Meeting Member and Advisory Committee member Neil Gordon.