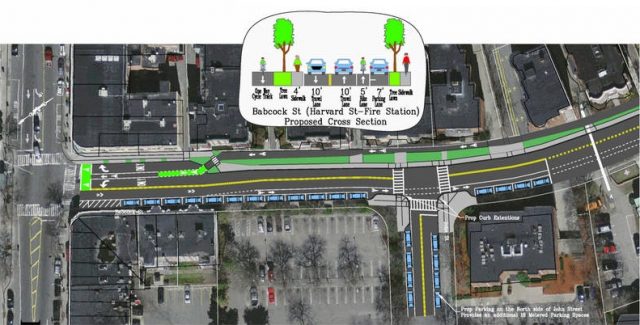 Babcock Street is back in the public eye next week. On Monday evening there is a transportation board meeting at town hall on current traffic calming measures after a series of (ahem) potholes slowed the process down.

Residents of the Coolidge Corner area say Babcock Street is a mess and are arguing for something – anything – to be done to make the area safer for pedestrians, bikers and everyone else. But they cannot quite agree on what that will look like, how many if any parking spaces to take and whether to include speed humps. To make matters a bit more complex, fire officials are concerned about what any changes could mean for their trucks and timing when they head out to respond to emergencies. 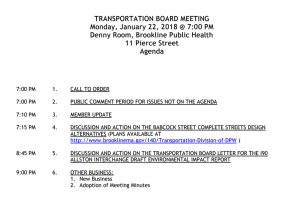 Earlier last year the traffic board together with community members sat down to hammer out a plan to calm the traffic there. Feelings were mixed about whether to get rid of parking and install a protected bike lane or use speed humps or raised crosswalks or a combination. They eventually decided on a plan, but when the project made it to the Select Board in the summer, they sent it back with several points to consider.

The project is funded by Chapter 90 money from the state, so it needs to follow design guidelines from the state. It is those state regulations that prompted the design team to incorporate extreme traffic calming elements like speed humps.

The project was scheduled start construction in June 2017.