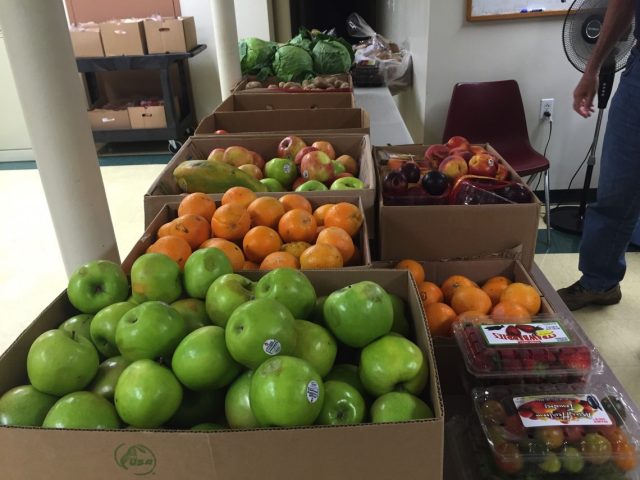 Just past peak, but perfectly fine to eat, crates of food from Volante Farms in Needham are donated to the Brookline Food Co-Op.

Volante Farms is one of countless stops for Vickie Schnoes and Tom Capizzi, two volunteers with the co-op which operates 7 days a week, 364 days a year. They take Christmas off. The food is available to anyone.

“We don’t ask for a referral, like a lot of food pantries do,” Schoes said. “If somebody shows up and is willing to stand in line and take their turn with the other people that need to do the shopping, we figure they probably are pretty hard pressed.”

The food is delivered to about 20 locations on various days.

“Most of our programs are in either Brookline or Boston public housing facilities,” Capizzi said.

The food is free to take. All, in large part, the idea of Brookline’s Shawn O’Neal. It was when she found herself in need, but not meeting criteria for certain aid, that she came up with the concept of collecting unused food to just give away. That was about two decades ago.

She spends much of her week at Rogerson Communities Adult Day Health Program in Egleston Square. They keep an eye on her health, and she keeps an eye on anyone who seeks out her advice navigating services.

“I’m always willing to help,” O’Neal said. “It can be very challenging, especially if you’re not active in the community.”

She’s become such an advocate for clients that she was asked by Rogerson to be on their advisory council.

Courtney Barth is the vice president of development and community relations for Rogerson Communities. She described O’Neal as “outgoing.” “She has a very calming presence. People do really like her and enjoy her company,” Barth said.

O’Neal’s natural inclination is to think about others by her involvement in the Rogerson day program and in her continued leadership at the co-op. Despite challenges with mobility, as she depends on a wheelchair, O’Neal still solicits donations and leads by example.

The Brookline Food Co-Op is unique in that they can take perishable items, because they’re delivered same day. Schnoes said donations barely cover their expenses, but they are determined to keeping going.