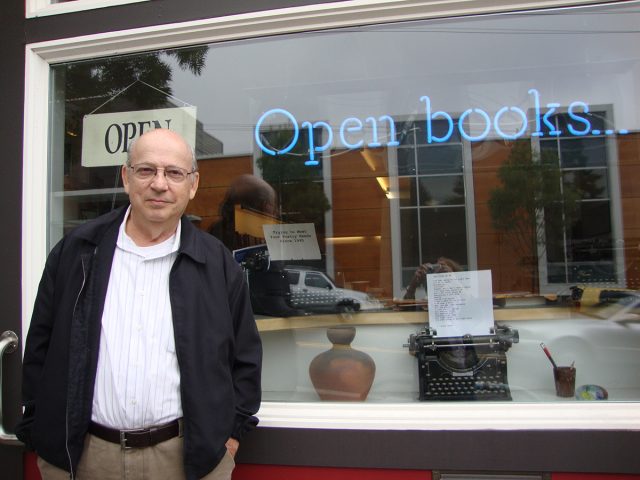 Brookline will get to meet its new poet laureate, Zvi A. Sesling, on Thursday, May 11 at the Brookline Public Library in Hunneman Hall at 7:00 p.m. The Brookline Commission for the Arts (BCA) appointed him to the three-year position that started on April 1. He succeeds Jan Schreiber (2015-17), who succeeded Judith Steinbergh (2012-15). The Thursday evening event, which is titled “Changing of the Bard,” is brought to town by the BCA and ArtsBrookline. Sesling, Schreiber, and Steinbergh will read the poetry of notable poets from New England.

Sesling started writing poetry when his short story submissions were routinely rejected. When he edited down some pieces to submit them again, more of his writing got accepted, and he thought he was better off doing poetry and continued writing poetry for the next 35 years. He describes his work as dark and is similar to the written styles of European poets.

“A lot of them write dark poetry that deals with death and war,” he said.

More than 100 magazines throughout the world, like in France, England, Australia, New Zealand, Israel, and Canada have published about 200 of his poems. He has read poetry at Brookline’s Jewish Poetry Festival, the Boston National Poetry Festival, and in San Diego. Among his many awards, he was nominated for the Massachusetts Poetry Book Award and the Penn New England Poetry Award, and won first place in the 2007 Reuben Rose Poetry Competition, a blind poetry contest in Israel.

The poet laureate position pays $2,000 per year that the Brookline Booksmith solely funds and only Brookline residents may apply. Wanting to give back to the town he’s lived in since 1962, and where his children and grandchildren grew up and went to school, Sesling submitted his application to BCA.

“Brookline has so many great writers, intellects, college professors, students, and people who enjoy the arts and literature, and I thought I can help contribute to this town’s wonderful education process in the arts and literature,” he said, also mentioning that he was inspired by Steinbergh and Schreiber. “They are really promoting poetry, and I thought I would really like to do that as well. I’m going to try and meet those standards.”

Along with the application, Sesling included three poetry books, of which won awards. Donna Hollenberg, who chaired the Poet Laureate Selection Committee, said he was the best option.

“When somebody published three books and nominated for poetry prizes, that is a big deal,” she said.

Sesling shared BCA’s goal in encouraging more poetry in the community. He mentioned in his application plans to hold monthly roundtable discussions about poetry, create a page on the town’s website to feature poems, and bring poetry contests and readings to grade schools, teen centers, senior centers, and religious institutions.

“He’s got plans to bring in people from all different ages, and he’s talking about diversity which is important in the town,” Hollenberg said. Other members of the selection committee were the former poet laureate Schrieber, John Plotz, Barbara Scotto, Michael Burstein, Dana Brigham, and Sarathchandra Reddy.

Sesling was one of three applicants. To not run out of future poet laureates, the Brookline Arts Commission has extended the poet laureate term for one more year, totaling three years. Sesling is the first to have the period of three years, ending his position on March 31, 2020. While pursuing his poet laureate plans for the town, he will continue to encourage young poets to keep refining and to submit work.

“Poetry is very subjective. You can send it to ten editors and get rejected, but the 11th one will take it,” he said. “Poets should just never give up.”

For his online journal, Muddy River Poetry Review, which he publishes two issues a year, he chooses to publish 40 to 50 poetry submissions out of about 300 regular submissions per issue. The first issue was published in Fall 2009. It now has a thousand subscribers. He’ll also continue to encourage young poets to read a lot of poetry. One line of poetry he can recite off the top of his head was written by Vietnamese poet Thanh Thao during the Vietnam War, which reads:

“A bird that tries to love its cage has no need to begin singing.”

“There is a dislike for the North Vietnamese because of the war,” he said. “Yet when reading their poetry 40 years later, one realizes how sensitive the poets are, how they love nature and people and really did not like the war. A reader can empathize with their emotions of loss, beauty, and humanity as opposed to war.”

Not only can he recite lines of other poets’ work in his head, but sometimes when he’s strolling through a park, looking at trees, and watching strangers walk he writes words in his pocket-sized Moleskin notebook and creates his lines.

“Anything in the world can result in a poem,” he said.

Two poems by Zvi A. Sesling

Descend into America’s hell
black wall rising like death itself
sinking lower, feeling depression push down
names, faceless names, stare back
through dotted i’s and crossed t’s
through curved c’s and rounded o’s
the names stare back
letters rearrange and ask,
‘Why am I here? Why not you?’

And The War Went On

Kennedy is dead someone
shouted and someone else
yelled Which one

At Kent State protestors who did
not want to die in the jungles of
Vietnam died, shot by National
Guardsmen who probably went
to Vietnam, maybe they were shot
there, perhaps by friendly fire
and the war went on until we lost
abandoned by our allies, the news
reported what happened, never
admitted we lost