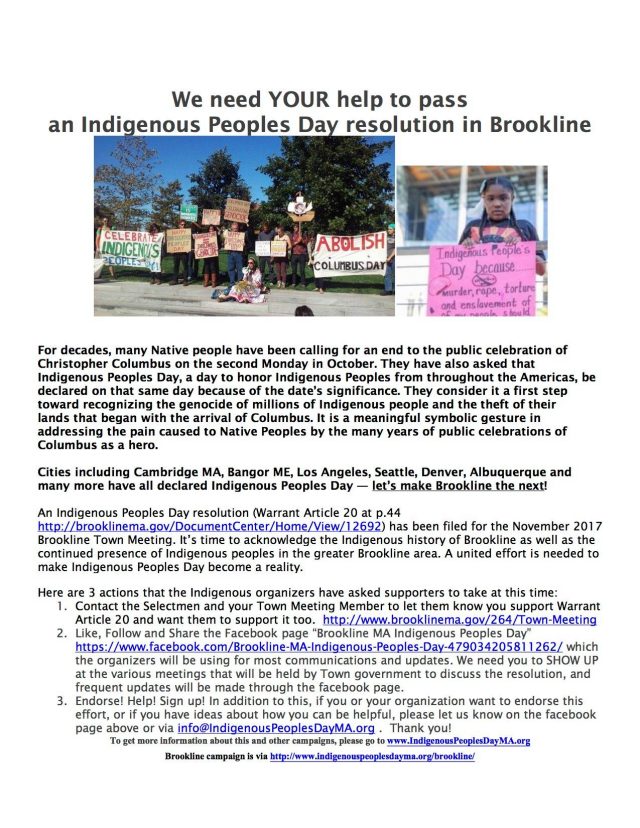 A resolution has been brought forth in Brookline to recognize the second Monday in October as Indigenous Peoples Day rather than Columbus Day.

The change would bring awareness to the history and importance of Native Americans in the U.S. rather than celebrate the deaths of those people, supporters say.

Voters will take up the resolution at Brookline Special Town Meeting on Nov. 14.

“As we write this, there is increasing awareness about the pain and damage caused by symbols such as confederate flags and statues, attention should also be paid to the longstanding request of many native people to abolish the Columbus Day holiday, which to them is a celebration of the deaths of millions of their people, and instead declare Indigenous Peoples Day on the second Monday in October in order to bring more awareness to the history and continued presence of native people here in the US,” reads the resolution, which is article 20 on the Town Meeting warrant.

Cities are beginning to recognize Indigenous Peoples Day rather than Columbus Day in New England and beyond.

Cambridge, Amherst and Northampton all celebrate Indigenous Peoples Day, celebrating the natives who lived on the land before Columbus arrived in 1492.

The Mashpee Wampanoag Tribe, the first Massachusetts tribe to make contact with the Pilgrims, will now call the second Monday in October Indigenous Peoples Day.

And, Plimouth Plantation recently announced that it would recognize Indigenous Peoples Day.

There is a petition circling to name an Indigenous Peoples Day in Boston.

The Indigenous Peoples Day movement started in Berkeley, California in 1992 to change the scope of the holiday in protest of honoring cruelty against natives by Christopher Columbus and his men.

In Brookline, supporters cite various reasons for wanting to make the change, including the reported rape and enslavement of native women and girls and accounts of murder against natives.

The resolution claims that two Brookline residents purchased seven Native Americans and sold them as slaves.

“Other accounts refer to signs of an Indigenous village that was located in the area where the Ackers family subsequently established a farm, near the present-day Brookline Reservoir, by Boylston and Eliot Streets,” the resolution reads.

A Facebook page for the Brookline movement has been updating people with meeting dates ahead of the Special Town Meeting.