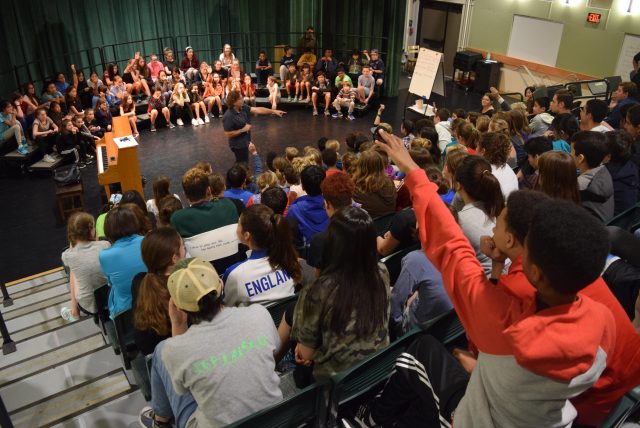 The altruism and innermost thoughts of today’s high school-and-under set are often validated through social media posts gone viral. So rarely do we get to vicariously experience life, according to them, through the form of choir and instrumental. On Jan. 9 and 10, 2018, a live audience will get to say it has.

Brookline’s sixth- to eighth-graders and the Brookline High School choral and orchestra members will perform “A Gift of Music” concert, the culmination of their collaboration with preeminent composer Jim Papoulis. The “gift” is also in reference to the reward earned by the Brookline Performing Arts Department by the Brookline Education Foundation (BEF).

The BEF received proposals for its 35th anniversary grant in spring 2017, and Kenny Kozol, the K-12 Performing Arts curriculum coordinator of the Public Schools of Brookline, got to thinking beyond the usual gadgets and tools for the classroom and students.

″[For us], this one idea struck me as very creative, and the essence of what we do in the performing arts. Let’s hire and work with a composer, meet with students and together, create a number of different songs, and even get the music teachers involved in the songwriting workshops, so they too have the experience,” Kozol said.

The composer Kozol had in mind was Papoulis, who is also a Brookline parent, with one teen currently at BHS and another that has since graduated. While Papoulis’ Rolodex of major music stars he has worked with include Aretha Franklin, Beyonce, Snoop Dogg, and the late Natalie Cole, he is passionate about writing choruses and working with young people. Kozol presented the idea of a composer creating one-on-one with students to the BEF in an “informational session” and they immediately valued the nascent project’s true creative tilt and “inclusive nature.”

Afterward, at their request, Kozol wrote a more standard proposal for such a remarkably grand and distinct idea. When Papoulis, whose choir and ensemble credits feature the New York Philharmonic, Portland Symphony, Moscow Philharmonic, and the Beijing Children’s Choir, was approached, he was thrilled about the invitation. It was his suggestion to broaden the notion of collaborating with just some students and instead, “Work with every student and really receive their input” Kozol said.

Once the Performing Arts Department was bestowed the reward, the first step for Papoulis was to become acquainted with what sixth- to eighth-graders – from all eight of Brookline’s elementary schools- wanted the emotional elements of the music and lyrics to be.

“I work with thousands, and thousands, of kids every year, alongside The Foundation for Small Voices, [leading songwriting workshops with choirs from Tanzania, Kenya, to Ireland and Greece] and in a lot of those songwriting workshops, I try to write music from the vantage point of the person singing it,” Papoulis said. “I don’t want to be this adult preaching to them. To me, I got so much out of talking to Brookline’s kids. There’s no better way to understand what’s in the mind of youth than to sit in a room and ask them questions.“
Kozol witnessed a majority of those thoughtful talks in which students were encouraged to speak freely on what it is like to grow up in Brookline, their hopes, and dreams, and what kind of music they listen to (Katy Perry, Pentatonix, Cream, jazz) and their responses for composing music “ranged from many ideas, specific lyrics, melodies, and harmonic.”

It was a group of about a half-dozen students that came up with the song title, “Let Us Rise as a People,” and the themes of kindness and openness carried on as the collective dream among Brookline’s middle school student body. As Papoulis visited each school, ideas were added like building blocks, and he ended up with a notebook of 30 pages filled with notes, later to be fine-tuned as a demo and then finalized.

“Their voices are really important to have in the world, especially today with so much bizarre-ness going on. What do they make out of it? It was just so nice to hear these thoughtful messages. They were worried about the right things. The name of the song speaks to how the only way we can move forward is to unite,” Papoulis said.

Brookline High students warmly suggested adding “a D minor chord, and as we keep ‘rising’, have a major chord towards the end of the chorus,” so as to leave the audience in an aura of aspiration.

After the January concerts, in which 480 students are expected to perform together, Papoulis will collaborate with kindergarten (a new frontier for him) to fifth grade, and the creative process will be similar, with song books written from the results of what these much younger mindsets like to sing about versus what they think of the world around them.

“A Gift of Music” will be a declaration of good-natured ideals to be matched by action in 2018 and beyond. “They’ve seen all this division,” said Papoulis, “and the Brookline student dream is to be a better society.”

Students will perform “Let Us Rise as a People” on Jan. 9 and 10 at the BHS auditorium at 7 p.m. Papoulis will conduct.