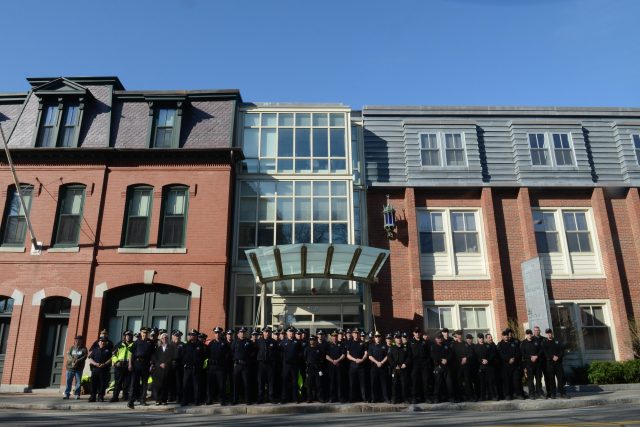 For the first time in 23 years Brookline will soon have a new police chief. On Jan. 20 Superintendent Mark Morgan stepped into a new role as Acting Chief of Police for Brookline, replacing Daniel O’Leary, who recently retired after more than 40 years of service – with 23 of those years spent as chief.

On Jan. 16 the Select Board appointed Morgan to the position. The appointment did not take effect until Jan. 20.

O’Leary’s decision to retire came thoughtfully, but the timing was right, O’Leary said. He felt the department was in a good position and it was time for him and his wife to try something new.

“The main part about it was I’m not getting any younger,” he told the media in December.

“I was basically in investigations,” said Morgan. “That was something I really enjoyed doing.”

According to a memo from Town Administrator Melvin Kleckner to the Select Board, Morgan has both a bachelor’s and master’s degree in criminal justice and is an FBI National Academy graduate.

“Superintendent Morgan is the second in command in the department and has been intimately involved in all aspects of its management and operations,” Kleckner said in the memo noting that the department has a number of good candidates.

“I know in-house that we have the talent to do the job,” said Morgan.

For Morgan, the qualities that make a good chief, Morgan said, are “extreme patience and extreme empathy”.

In the memo, Kleckner said he plans to consider candidates both inside and outside of the department. To help with the search, Kleckner plans to bring in a consultant who is familiar with “the challenges of a modern police department operating in a progressive and active community and who is familiar with the current issues and trends in policing.” The consultant has not yet been selected.

The process is expected to take up to six month, according to the memo.

In the meantime Morgan said he plans to work on completing ongoing projects like technology upgrades and a review of the civilian complaint policy – all projects which started under O’Leary.

“I think the chief has left us in a good position,” said Morgan.