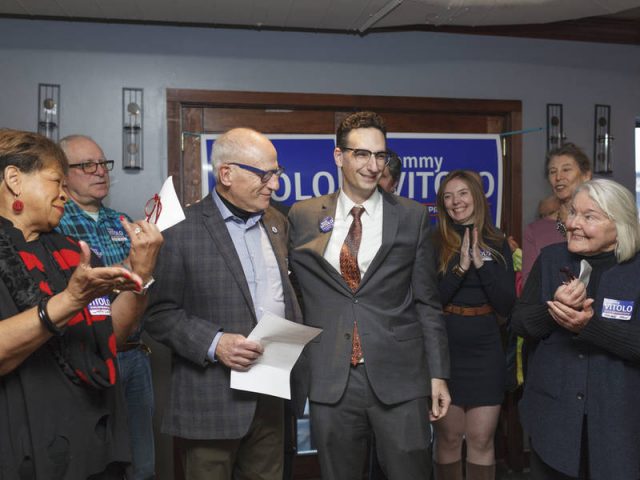 Vitolo is running to represent the 15th Norfolk District, the seat which is to be vacated by longtime State Representative Frank Smizik who announced last month that he will not to run for reelection. So far the only other Brookline resident who has announced a run for his seat is Town Meeting Member (and former Brookline School Committee member) Rebecca Stone.

Vitolo told those present that once on Beacon Hill he would advocate for Brookline and for social and economic justice, for education, for the environment but he would focus first on equity.

“Opportunity for everyone ensures better outcomes for all of us,” he told those present, according to a press release.

A number of Brookline’s who is who were present, according to several reports on Twitter, including Smizik, who Vitolo had worked for as campaign treasurer.

“Tommy Vitolo is the candidate who can carry on my legacy championing civil rights and criminal justice reform, supporting our public schools, and maintaining and expanding Massachusetts’ leadership in tackling climate change. It is for these reasons and more that I am endorsing his candidacy,” he said, according to the press release.

“I see Tommy all over Brookline, attentively listening and then building consensus on solutions that will move our town forward. He’ll be an excellent state representative,” she said according to the campaign.

Vitolo lives near Washington Street with his wife Jennifer and their two children. He has served as a Town Meeting Member since 2007 and Town Constable since 2010. He is currently a Senior Associate at Synapse Energy Economics, a research and consulting firm specializing in energy, economic, and environmental topics for public interest and governmental clients. Vitolo is a PAX board member, a member of Town Meeting’s Green Caucus and Recorded Vote Coalition, an elected Democratic Town Committee member, and active in the Progressive Democrats of Massachusetts’ Brookline chapter.