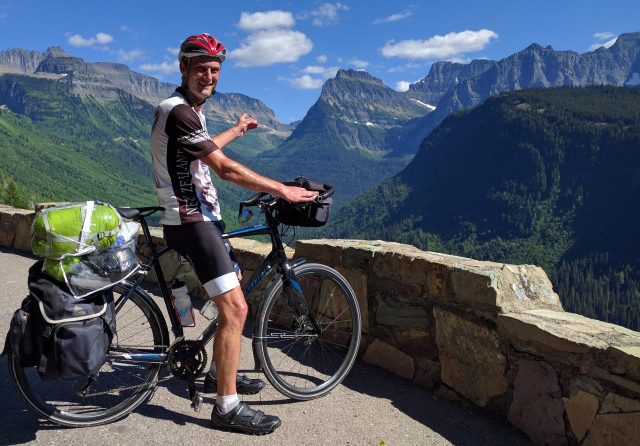 Hudson Doyle is about to embark on an eight-month trip from Canada to South America, but not by plane, nor by bus, but by bicycle.

The 35-year-old Brookline resident will cycle his way from Vancouver, along the coast and end his trip in Colombia. Though well seasoned in travel by bike, this will be Doyle’s longest solo bike tour, and he cannot wait.

“Traveling by bike in my experience is the best experience,” said Doyle. “It’s so real, you can’t skip anything, it’s a great adventure.”

Doyle got his introduction to touring by biking 2002 when he spent three weeks cycling around New Zealand with two people he met while abroad. After completing the memorable adventure, Doyle was hooked.

Since then he has toured nine times, of which five were solo trips. He has completed two round- world trips, cycled through the Pacific Northwest and climbed his way through Glacier National Park in Montana to Jasper National Park in Canada.

For Doyle, touring by bike has allowed him to take in the world’s natural beauty and get to know its people. On his bike trips, Doyle has found that people can be more hospitable, often inviting him to their homes for food and conversation.

“When you show up to a town by bike people notice you, they talk to you,” he said.

The satisfaction of putting in the work to reach a destination and conquering those tough climbs also makes biking a standout way to travel.

He recalled one tough climb in the Pacific Northwest, which he compared to five miles up an incline akin to Summit Avenue. Upon reaching the summit an hour and a half later, utterly spent but exhilarated, Doyle stopped, and roared.

“There’s nothing more important in my opinion than the environment,” said Doyle.

Touring, he said, allows you take it all in, in a way that travel by bus, train or car would not.

Having traveled throughout the world, Doyle said he has seen many places where poverty and environmental degradation are prevalent. It is a trend that Doyle expects will spread farther west, and he wants to take in the world as it exists today before it disappears.

Doyle’s trip will take him from Vancouver, along the West Coast to Yosemite National Park, through Death Valley and the Mojave Desert to La Paz. Once in Mexico he’ll travel through every country in Central America except for Belize and take a five-day boat trip from Panama to Colombia where he will tour around the county and end in Cali, Colombia.

It is a daunting trip, and the towering Tioga Pass in Yosemite will prove a particular challenge.

“I get nervous just thinking about it, it’s double the height,” said Doyle.

Motivated by a determination to live a life driven by passion, Doyle aims to break out of the work to live cycle. He has spent the past eight to 10 years working and saving to financially position himself to make the trip.

“You have to have vision about what kind of life you want to live,” Doyle said.

While traveling solo can be lonely at times, it is also liberating, he said.

Though crime in Central and South America is a bit of a concern, Doyle said, people abroad are far more hospitable and friendly than is often depicted

“The world is a more friendly place than it’s given credit for,” he said.

When he returns, Doyle is unsure if he will return to work practicing Chinese medicine, or if he will pursue other interests. He may even head to Lisbon and bike through Europe to Greece.

For those interested in going on a bike tour, Doyle advised starting small with a weekend trip somewhere beautiful.

Though admittedly nervous, the trip, he is sure, will be well worth it.

“It’s not easy, but of course great things aren’t easy,” Doyle said with a grin.