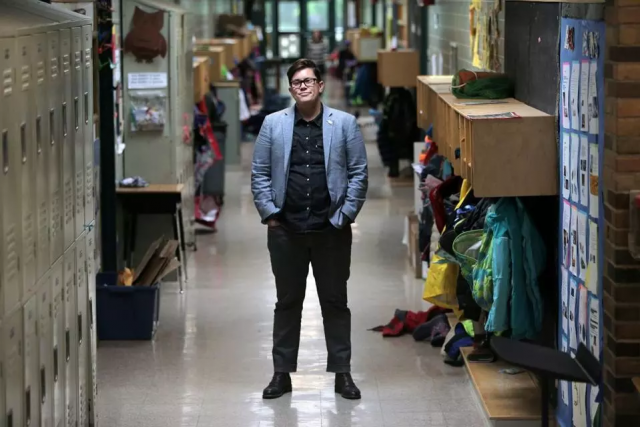 At noon on Wednesday, Asa Sevelius hit send on the e-mail that would change everything.

“Dear Heath Community, I am writing to all of you to share some powerful news about me…”

As principal of the Heath School in Chestnut Hill, he had made sure to keep his life from affecting his work. Even in a community as loving and progressive as this little school, which runs from pre-K through eighth grade, it is important to maintain boundaries.

But now people could see he was changing. It was only going to become more obvious. And he had pretended for way too long. It was time.

For most of his 45 years, Sevelius, until now known to all as AC, has felt like a visitor in his own body. Ever since he could remember, before he even had words to describe it, being a girl felt wrong. He was born in Georgia, into a military family that moved around a lot. Sevelius’ South — religious, conservative — never felt safe. But while others were deeply uncomfortable with his refusal to go along with the conventions of the gender he had been assigned at birth, his parents accepted his resistance. “Is she all right?” people asked them. “What are you going to do about that?”

What they did was let Sevelius be. The two years his father was stationed in South Korea were the happiest of his childhood. There, he called himself Andy, living as a boy almost immediately after he arrived. He was fully himself, finding acceptance on a military base where everybody was from somewhere else.

Back in Georgia, the short hair, the boy’s clothes, the sneakers he insisted on wearing to church on Sunday were abnormal and confusing to people. He tried to fit in, wore his hair longer and styled, attempted makeup. It was all a performance. He remembers looking at his class pictures from sixth through ninth grade, showing his increasingly strenuous attempts to conform, and feeling more and more estranged from himself.

“It was like wearing clothes that don’t fit all the time, and they don’t fit in 10 different ways,” he said, speaking in his office earlier this week. “Without language, without models, without any resources at all, you don’t know how to make sense of it. The one thing that felt right was so damnable by society.”

He retreated, hiding behind his smarts, and his humor, hoping not to be noticed, not wanting to register in people’s minds as someone who was not real. College brought a measure of liberation. He came out as a lesbian, and became active on gay rights.

“It seemed to be an OK fit for a while,” he said. But he still did not feel whole.

He fell in love in San Francisco, with a Massachusetts woman. Glorious, seismic changes came in 2003 when same-sex marriage was legalized in this state. They moved back, got married, started a family (their children are now 5 and 10). It was wonderful. And yet.

“We were making our own family, making a home with two fish and a cat and a lawn I got to mow,” he said. “But I had these ceaseless waves of dysphoria” — jarring conflict with his physical appearance — “and I would just shunt them aside. It was this endless feeling of ‘something else.’ What is that other thing that won’t leave me alone?”

The answer came a couple of years ago. The nation, or parts of it, had started talking seriously about transgender rights. Transgender celebrities like Laverne Cox and Caitlyn Jenner were telling their own stories, and Sevelius felt a shock of recognition.

With support from his wife, his family, and his friends, he began to transition. Nobody else knew at first, unless he chose to tell them. But the changes to his appearance were becoming more obvious. He had to come out professionally, too, to say something publicly.

“During my life, the decision to transition has always felt so personal; it remains personal. That said, I recognize that I play a very public role in our community.”

“People ask me, why do you have to do this?” he said. “The funny answer is, ‘Well, one of these days I’m probably going to have a beard and people might wonder why.’ But I also deserve it. I deserve to be able to show up to my life as the person I am. And so much of my life is lived right here in this school.”

He knows how lucky he is. He works in one of the most tolerant places in the country, and has the full support of his district. The colleagues and parents with whom he has shared the news before now have been open and loving.

“I’m very privileged in my ability to do this,” he said.

On Tuesday afternoon, Sevelius called his staff together, and they folded themselves into little chairs in a first-grade classroom. Shaking, he delivered the news. Some of his teachers were relieved: There had been a rumor that he was leaving the school. They applauded and hugged him and pledged their support.

He has not slept well lately, worrying about how the wider community will react. The kids, he is sure, will be remarkably accepting, as they seem always to be. In the e-mail, Sevelius has included guidelines for parents when they talk with their children about his transition, and suggested readings. He is ready to answer as many questions from parents as he can. Beyond this circle of safety, he is bracing for ugliness.

“I fully recognize my ZIP code here does not protect me,” he said.

With gay marriage settled law, transgender rights have become the wedge issue of our day. And much of the debate has centered on kids and schools. Sevelius is now right in the center of all of it. It is not a comfortable spot to be in. But it is where he belongs.

“I work very hard to make this a community that is not going to bend on issues of inclusion and full acceptance, where any kid should be able to walk through those doors and have any opportunity,” he said. “I was that kid who had no idea who I was, and nobody to show me the way. I don’t pretend to believe I am some kind of beacon, but if one kid thinks, ‘That’s cool, that’s just like me,’ that would be pretty awesome.”

It is exhilarating, and terrifying, too. Sending that e-mail revealed a secret he once thought he would take to his grave.

“Suddenly, the thing you thought you’d never tell anyone in your whole life is public knowledge,” he said. “Something I’ve been trying to control so carefully and meticulously and thoughtfully is out of my control.”

He is as ready as anybody can be. He cannot hide anymore.

And he looks forward to that time, which will surely come, when no one remembers Asa Cain Sevelius was ever anybody but himself.