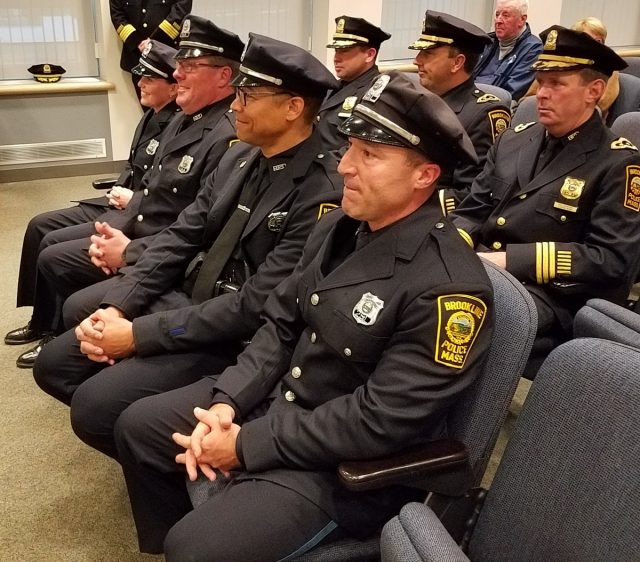 Tuesday four Brookline Police Officers were recognized for serving their community, chasing down suspects to saving lives and serving as role models to young people in town. Town officials praised them for the work they do serving Brookline.

“You don’t have an easy job and it’s not an easy time to have the job,” said Selectman Ben Franco. “You deal with people -sometimes on the worst day of their lives – and you deal with them with compassion. Thank you for that,” he said, noting he recognized the list of the accomplishments of the officers standing before the board was just a snapshot of what they did each year. 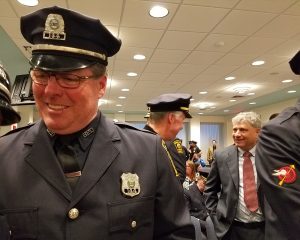 Officer Tim Stephenson was award the 2016 Police Department Public Service Medal is one of those officers. He was recently also recognized at the 2017 Brookline Teen Center Impact Award for his work with youth and families in the both the community and the teen center.

“Timmy’s been with us for a long time. He’s worked in the ‘walk and talk’ for a lot of years. When we put walk and talk in place our goal was to provide positive role models for kids to look up to. Timmy epitomizes all that”, said Chief Daniel O’Leary. Kids look up to him, he can head off problems and by the same token he holds everyone to high expectations, said O’Leary of Stephensen.

A Brookline Police Officer since 1996, he worked in the Patrol Division until 2004, before moving into the Walk and Talk Unit in the Community Service Division where he has worked primarily with families in public housing and youth across Town for the past 13 years.

“Officer Stephenson exemplifies someone who does great youth work day in and day out whether or not they are on or off shift. He greatly cares about kids and this shines through when watching how he works with youth to make different and better decisions,” said the Brookline Police Department on Facebook recently.

He includes and gets to know the families, collaborates with the teen center and the high school, is extremely thoughtful in his interventions and sees his role as being supportive. Stephenson always finds the positive in each youth even if he sees them at their worst times and also makes it a point to see them when things are going well. He is an invaluable asset to the youth of Brookline and those who work with them.

Officer Stephenson sits on the Town’s Juvenile Roundtable, oversees the Graffiti Taskforce and supervises juveniles serving community service hours through the Brookline Court. Last year, Officer Stephenson assisted in running the 3×3 basketball program at the Teen Center and co-coordinated the Youth Police Initiative. He serves on the Police Department’s Training Division, Crisis Intervention Team, Crisis Negotiation Team and the Bike Unit. And many kids around town know him simply as coach. 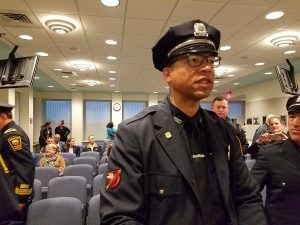 Williams, who has been on the force since 1995, identified and chased down a man wanted for burglary, but he also represents a police officer with compassion, said the police chief Tuesday. Last year Williams was on the scene after someone called in that a woman had been beaten and robbed by a member of her family. When Williams arrived the woman turned out to be 88 years old and was on the floor badly beaten.

Williams took care of the woman and stayed with her while she was getting medical attention. “Then he took her to court and sat with her and made sure she had counseling and help. That’s the type of person Sean is,” said O’Leary. 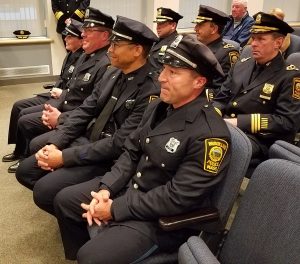 O’Leary described Amendola as a mentor to younger officers. He described an incident earlier in the year when Amendola helped locate a teen who was concerning his parents, and was armed with a screw driver. The teen at one point made a run for it, and reached into his pocket, as if he had a weapon, as Amendola was chasing him. But Amendola was able to get the teen and help calm him and get him the mental health care at a hospital.