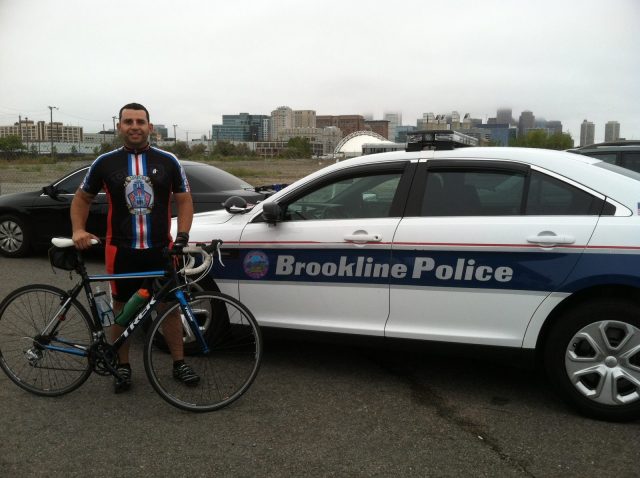 In celebration of National Hispanic Heritage Month, the Brookline Police Department is honored to introduce you to Officer Oscar Santos…

Officer Oscar Santos joined the Brookline Police Department in 2013 after graduating the State Police Municipal Academy. He was born and raised in Siguatepeque, a small town in Honduras. He moved to the United States in July 2001 and attended Chelsea High school. From 2013 to present, Officer Santos has been assigned to the Patrol Divisionworking the overnight shift. Officer Santos is also assigned to the Bicycle Patrol Unit. In 2014, he was awarded the First Responder Recognition Award by the Massachusetts Municipal Police Training Committee.

During his time at the Brookline Police, Officer Santos has run two Boston Marathons (2015 and 2016). Officer Santos has also been involved with The Tour de Force since 2014, riding his bicycle 275 miles along the east coast and raising money. This charity helps families who have lost a loved one in the line of duty.

Officer Santos has also been involved in the nonprofit organization Las Margaritas (lasmargaritasfoundation.org). This nonprofit runs a camp during the summer, organized by Brookline teachers, Tanya and Josh Paris, which brings Brookline High School students to the Dominican Republic to make a difference in the community there. This summer, Officer Santos, along with his team, put his superior woodworking skills to use building a playground for a Dominican elementary school.

Officer Santos currently resides in Dedham with his wife, Yasira and their pup, Topper. In addition to riding his bike for charity, running marathons and volunteering to help a small town in the Dominican Republic, Officer Santos is a woodworker who can build an impressive cornhole set! In his free time, Officer Santos enjoys spending time with family and friends!

We are proud of Officer Oscar Santos and grateful for his service.