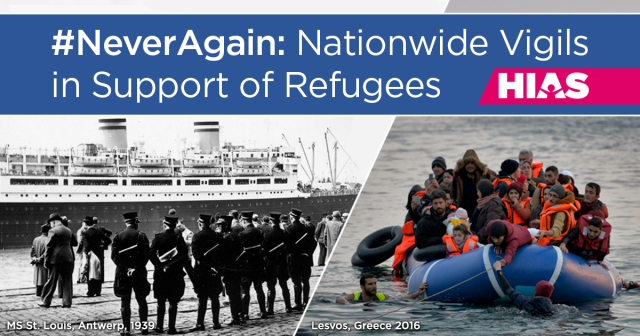 The Jewish community in Brookline will join 21 towns and cities across the country this week in hosting a candlelit vigil to welcome refugees, while also remembering a dark day in America’s past.

The #NeverAgain vigils will be held Tuesday, June 6, marking the same date in 1939 when the MS St. Louis, carrying a ship full of Jewish refugees, was forced to turn around at American borders and sail back to Europe.

“In 1939, the U.S. government denied safety to the hundreds of Jewish refugees on board. In 2017, our community will stand together to call on our elected officials not to make the same mistake again by denying safe haven to today’s victims of violence and persecution,” the Hebrew Immigrant Aid Society said in a statement.

The event will begin at 6:00 p.m. Tueday evening in front of the Pierce Building on the corner of Beacon and Harvard Streets. HIAS lists at least 23 scheduled vigils across major cities like New York, Baltimore, Los Angeles and San Fransisco, as well as a number of small towns.

The nationwide vigil comes on the heels of President Donald Trump’s controversial reaction to terror attacks in London over the weekend. The vehicle-ramming attack on London Bridge and stabbing spree at Borough Market left seven people dead and 48 others injured late Saturday, prompting Trump to send off a series of Twitter messages, one of which called on courts to revive his failed executive orders to ban people from six majority-Muslim countries, “We need the Travel Ban as an extra level of safety!”

HIAS, the group organizing the Jewish community vigils across the country, works to “protect and assist refugees of all races and ethnicities,” marking a sharp contrast to the policies of the Trump administration.

“Show your Members of Congress that the American Jewish community fully supports welcoming refugees to the United States,” HIAS said in a statement.