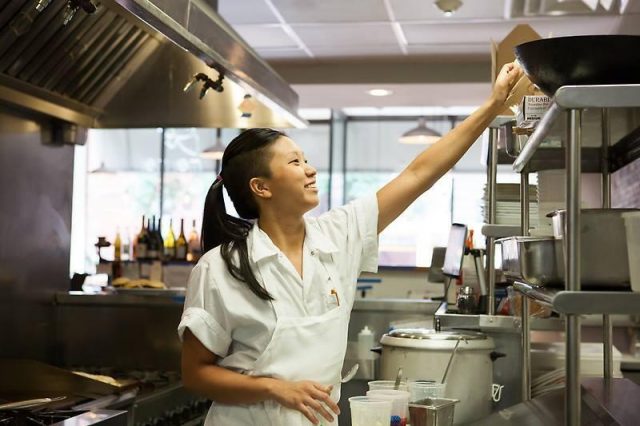 At 27, Irene Li is making a name for herself in the culinary world.

Zagat recently named the Brookline native and co-founder of the Mei Mei Street Kitchen as one of its 2017 “30 Under 30” national winners for excellence in hospitality and influence in the restaurant world. This is the first time that Zagat has issued a national “30 Under 30.”

“It’s amazing to be with a group of incredibly talented young people,” said Li.

Honored and grateful to be included in the list, Li is not new to awards for excellence. She is also an Eater Young Gun winner and a three-time semifinalist James Beard Foundation Rising Star Chef.

The awards speak to Li’s passion for food and social justice, which she brought to Mei Mei Street Kitchen, a food truck she started with her brother and sister in 2012. The truck quickly rose in popularity leading the trio to open a namesake restaurant near the Audubon Circle in Brighton in 2013.

For Li, it is Mei Mei’s staff that has helped put Mei Mei on the map.

In an industry where long hours, low pay and little time off is prevalent, Li said that she and her siblings placed a premium on treating their employees well and creating a good work environment.

“We have really tried to put our team members first in a lot of situations,” said Li.

The result is a loyal employee base. Many team members have been with Mei Mei since the start, according to Li.

“When they talk about what they love most about working at our restaurant is the people,” she said.

Contributing to that sense of team effort is Li’s willingness to jump in wherever needed.

“You can definitely find me plunging toilets or washing dishes,” she said.

It is that sense of teamwork that has helped Li achieve her ultimate goal of creating a welcoming, family air for customers.

This is further boosted by Mei Mei’s proximity to Brookline, where Li and her siblings grew up, and where her mother still lives.

“People from Runkle, from the high school, our friends, their parents, are always coming by,” said Li.

Adding to that welcoming atmosphere is Li’s mother who often stops by to add homey touches like flower bouquets.

The result is a restaurant that feels more like a dinner party at a friend’s house, Li said.

The trio ran Mei Mei together for several years, but Li now oversees much of the day to day.

Though she seems to have effortlessly stepped into the culinary world, Li has no formal training.

She became interested in the culinary world after advocating for social justice issues as an organizer. In Ithaca, NY she worked in a education program at a maximum security prison. Though passionate about the work, Li eventually burnt out.

“One of the ways I found myself recharging was going to them farmer’s market every weekend,” said Li.

As she came to know the farmers and began exploring more and more with different foods, Li found her interest deepen.

Her experience helping a friend open a farm-to-table Mexican restaurant furthered her interest in farm to table practices.

Li began educating herself on locally grown food and best practices. She visited a pig farm in Ithaca which was known for humanely raising pigs by letting them stay mostly outside, eat good food and, as Li put it, act like animals.

Hoping to learn more, Li took on the daunting task of cooking her way through the pig and the cow, to learn where eat cut of meat comes from and how it can be used.

The experience was enlightening for Li who has since refined her butchery skills.

Looking back Li acknowledges that the switch from activism to culinary seems unusual.

“The first thing I always think about is how unlikely this story seems,” she said with a laugh.

In many ways Li said she feels as if she has stayed close to her interest in social justice through the way in which Mei Mei cultivates community.

Thrilled with her Zagat distinction, Li is staying true to the Mei Mei team philosophy.

“I wish they could recognize the whole team,” Li said.