In 1918, one-hundred years ago, woman-kind was granted the ability to enlist into the Marine Corps Reserve for clerical duty. Opha May Johnson officially became the first woman Marine, which set the example for others to emulate.

Olivia G. Griffin, a Brookline, Massachusetts native, is currently in the process of enlisting out of Recruiting Substation (RSS) Boston and hopes to continue Johnson’s legacy and become a Marine even in the face of others’ negative thoughts and feelings.

“I have always loved my country and wanted to serve,” said Griffin. “Getting ready to go into high school in 2014, I decided that the Marines were the best fit for me because of the challenge, camaraderie and the idea of ‘earned never given.’”

Though committed to earn the title, Griffin’s parents were reluctant at first to accept her dream of becoming a Marine, she said. For recruiters, a common issue they face is concerned parents.

Engaging with unsupportive parents can be extremely challenging, said Gunnery Sgt. Daniel J. Eddy, the staff noncommissioned officer in charge of RSS Boston. He said that in cases like Griffin’s, recruiters try to explain to parents how the Marine Corps will benefit their children. 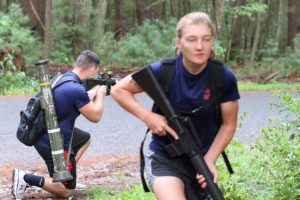 “Often times it is difficult for us to overcome their fears of their children potentially being placed into dangerous situations,” said Eddy. “As a father to an eight-year-old daughter, it would be difficult for me to see her leave for any institution, whether the Marine Corps, another military branch, or a college or university, but it is an inevitable part of our lives and we should strive to ensure that we prepare them.”

Griffin’s mother, Caroline Levine, explained that she was not surprised by Griffin’s interest in the Marines. Levine said she will support her daughter if this is her goal and wants her to feel supported by her family. She also believes Griffin will be a great leader because of her determination, intelligence and physical fitness level.

Currently, only about 30 percent of age-qualified youth are eligible to serve, but more than 90 percent of them are disinterested. Even more so, of that 30 percent, less than eight percent of women are even interested in military service let alone the Marine Corps.

Griffin explained that people unfamiliar with the Marines are often shocked when she shares her plan to serve after graduating early from Brimmer and May, a K-12 school. She believes it’s mostly because she’s a female.

Regardless of what people said of her decision to enlist, Griffin swore into the delayed entry program (DEP) on June 7, 2017, to serve in the Military Police (MP) occupational specialty. Upon entering the DEP, Griffin became what is known as a poolee and will continue to prepare for recruit training until her scheduled ship day. 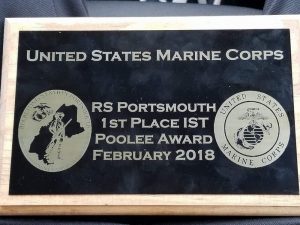 Griffin said that no one looks at her differently because of her gender at RSS Boston. Raymond Tam, also a poolee at RSS Boston, shared his thoughts on Griffin’s character traits.

“She is highly motivated, physically fit, willing to go above and beyond, and helped me and others meet goals, expectations, and become overall better,” said Tam. “I see her excelling in everything she does, and it will definitely follow her throughout her time during [recruit training] and her career.”

While in the DEP, Griffin became the poolee guide, which is a position of leadership among enlistee pools of recruiting substations.

“Poolee Griffin, from day one as a poolee, here in RSS Boston, has demonstrated consistent professionalism far exceeding her current age and experience,“ said Eddy. “She demonstrated initiative in not only improving her physical fitness and Marine Corps knowledge, but also mentoring and encouraging the other poolees to push themselves.”

Upon graduation of high school, Griffin will leave for recruit training May 21, 2018, and hopes to work with military working dogs as an MP.

“Some people think I’m crazy for enlisting, while others see it as a great opportunity and respect it,” she said. “I think it’s pretty cool how far everything has come since Opha May Johnson’s time. I’m proud to help continue that legacy and I’m excited for what’s to come in the future.”