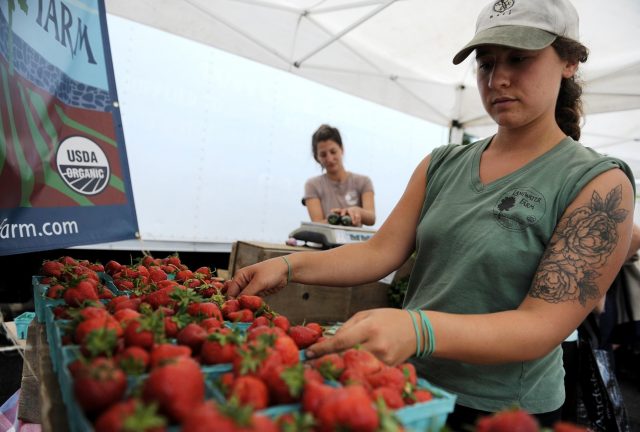 Now, the market is undertaking efforts to raise enough money to continue the program.

For the past three years the market has provided match money for those using SNAP, a federal program allowing low-income customers to purchase food using an Electronic Benefit Transfer card, which acts similarly to a debit card.

Those on the SNAP program stop by the market’s SNAP tent to swipe their EBT card and collect tokens equaling the amount they would like to spend. The market uses its own private fund to then match up to $10, thus increasing the customer’s purchasing power.

Such private match programs are common among area farmers markets, according to Market Manager Nicole Aube.

She estimated about half of the Brookline market’s customer base uses SNAP/EBT or a new program called the Healthy Incentives Program, HIP.

It is the recent roll-out of HIP that prompted the sudden increase in customers at the market, according to Aube.

Rather than use tokens, HIP, allows approved farmers to sell directly to HIP customers through a new electronic system. The program rewards customers for purchasing fresh produce by adding the money spent on produce back into their account, thus encouraging them to buy more produce.

The system works using a list of approved produce and vendors, meaning a customer can only get their money back if they purchase certain produce from approved vendors, all tracked through HIP’s electronic system.

Those dollars earned back are limited to monthly caps ranging from $40 to $80 depending on household size, according to the HIP website.

HIP is not intended to replace SNAP, rather it is meant to compliment the program and encourage SNAP users to take advantage of local markets.

In an effort to boost HIP, the government sent out fliers to SNAP users with information about the program and local markets where the program can be used.

The result was a sudden and unexpected increase in SNAP/HIP customers looking to use the Brookline Farmers’ market’s match program.

The impact on the match program

While the increase in customers was good for business, it also quickly depleted the $2,500 in the market’s match fund.

“We ran through that money in the first five markets,” said volunteer Brookline Farmers’ Market Co-Director and Treasurer Abe Faber.

The market had expected that amount to last the entire season, based on usage in the previous two years.

In between seasons, Faber, who is the co-owner of Clear Flour Bread, spends time collecting private donations for the match program. When the market ran out of fund five weeks into the season, he quickly set out and managed to raise additional funds, but those funds also quickly depleted.

The market then turned to the Internet.

Faber set up a GoFundMe account through which the market raised $1,000, enough to continue the program for another week or two, but not enough to last the season. As a result the market suspended the match program with plans to collect donations between now and the start of next year’s season.

While the match program is suspended, SNAP and HIP are still running.

Though market has had to temporarily stop the match program, Faber and the market team see the depleted funds as a good problem to have, as it means more people are taking advantage of the program and shopping at the market.

The market’s GoFundMe page is still active and if it raises between $5,000 and $6,000 in the next month or so, Faber said the market could re-launch the match this season.

Otherwise, Faber said, it would be better to reserve funds raised for next year, which is sure to see an equally high number of SNAP and HIP customers.

A lack of communication

When the government distributed fliers to HIP users directing them to local markets, it did not notify the market that it would be doing so, said Aube.

As a result the market was left unprepared to accommodate the increasing demand for match money. Market volunteers also found themselves faced with the challenge of trying to help SNAP users understand how to use HIP.

As both programs can be used together, the challenge lies in helping SNAP and HIP users understand how to utilize the programs to maximize their money.

While in past years, SNAP users would immediately go to the SNAP tent to get their tokens to use at the market, now it makes more sense for them to first purchase produce covered by HIP and then collect their SNAP tokens to purchase whatever items they need that HIP will not cover, Faber explained.

“People have to understand how to play the system to make it work well,” Faber said.

Adding to the challenge of explaining the new system is a language barrier.

Many of the regular customers who use SNAP at the market do not speak much English, making it difficult for market volunteers to explain the new changes.

Shafer signed up to help at the market after learning of the difficulty volunteers were having trying to communicate non-English-speaking customers.

In addition to Russian translators, Aube said the market also has some volunteers who help Mandarin speakers.

In addition to translators, the market has also created fliers in multiple languages to help explain HIP to customers.

While many have been understanding of the match program’s suspension, some have become upset.

According to Shafer, an English-speaking customer, became upset because she thought the changes meant she would be unable to buy the food she usually purchased at the market.

“For her it felt like she wasn’t going to be able to eat,” Shafer said.

According to Aube, much of the frustration is due to confusion over how the new program works. She noted that tensions have been easing as customers adjust to HIP and market volunteers are better able to communicate.

“I found that a little bit of Russian was enough of a step towards them,” Shafer said of helping ease frustrated customers.

Though the launch of HIP got off to a rocky start, the Brookline Farmers’ Market team remains supportive.

Those looking to donate to the Brookline Farmers’ Market SNAP fund can do so at here.