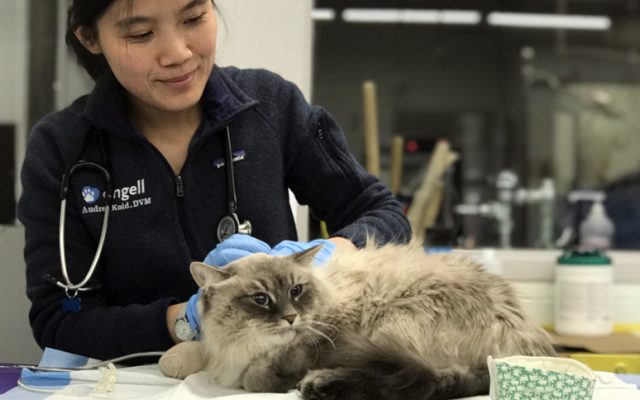 A Brookline family’s cat is lucky to be alive after falling from a nine-story balcony on Halloween and landing on a concrete patio below, the MSPCA’s Angell Animal Medical Center said.

Simba, who lives with the Jardus family, somehow slipped off the balcony and plunged to the ground, shattering his jaw and two of his legs and nearly rupturing his lungs.

Simba laid by the side of the building, enduring overnight temperatures that fell into the 20s before he was found the next afternoon, according to Victoria Jardus.

“Simba was in shock when he first arrived and it’s quite miraculous that he survived at all,” Dr. Virginia Sinnott of Angell’s Emergency & Critical Care Unit said. “His temperature had dropped to 86 as opposed to 100, which is the normal body temperature for a cat, and he suffered multiple injuries that could easily have killed him.”

Simba spent eight days in the hospital, during which time veterinarians applied splints to help his leg heal, according to officials. His jaw fractures went on to heal on their own.

Jardus says Simba is still recovering but that the worst is behind him.

“He is through the worst of it and for that we’re so grateful,” she said. “We came so close to losing him and I’m overjoyed to see him improve a little each day.”

Dr. Emily Ulfelder says it’s extraordinary Simba survived given the height from which he fell.

“Many pets die from falling from windows or patios that are not even half as high,” she said. “He is so lucky to have landed the way that he did, as the fall alone could easily have killed him.”

Simba is said to be walking, breathing and eating well.