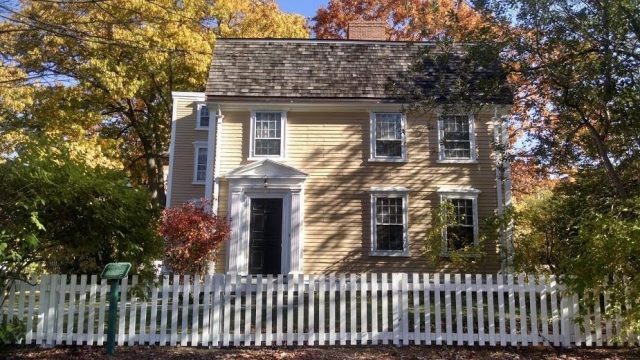 As the newly renovated Edward Devotion School nears its reopening, one element of the school is prompting a second look – the name of the school itself.

The school is named for Edward Devotion, a prominent Brookline figure who used to own the land where the school sits and who donated funds to Brookline to be used for educational purposes, according to School Committee member Helen Charlupski. He was also a slave owner.

“Once you learn something awful about the person, then you have to deal with it. There’s a reckoning that takes place,” said Brookline resident Deborah Brown.

Brown, along with Devotion parent Anne Greenwald, has filed a warrant article for May Town Meeting, seeking to change the name of Devotion School.

For Brown, the name is a contradiction of Brookline’s values of inclusivity and she questions the message to children that a school in Brookline could be named for a slaveholder.

In response to the move to rename Devotion School, some have argued in favor of keeping the name on the grounds that Devotion has always been the school’s name and that it has a legacy of proud alumni.

Pushing back, Brown pointed out that it is the school itself, not the name, that has made the school what it is.

“It’s the people, it’s the experience, it’s all those things that a name change cannot take away,” said Brown.

In 2005, Town Meeting passed a by-law establishing the Naming Committee which would be responsible for reviewing and recommending names for public facilities like buildings and parks.

“Town Meeting is the body that names buildings but in order for them to name the building it has to come from the naming committee,” said School Committee Chair David Pollak.

Brown and Greenwald’s petition also includes a suggestion for alternate name – Roland B. Hayes. Hayes, a Brookline resident, had a tremendous impact on music.

He was among the first to bring spirituals to classical music and he kept company with the likes of Martin Luther King Jr., Langston Hughes, Eleanor Roosevelt and Pearl Buck. In 1923, after performing for England’s King George V and Queen Mary, Hayes returned to the U.S. and became the first African-American to be featured with the Boston Symphony Orchestra, as the media reported in 2016.

While Hayes stands out as an option, most important for Brown is for Town Meeting to decide to rename Devotion.

The by-law includes four general criteria to be considered when looking at a name which includes a person or arganization who/which has set an example of outstanding citizenship and a significant donation or bequest, establishment of a trust, or other similar action according to the town website.

Brown feels that Edward Devotion would not meet those criteria today.

“Using the town’s standards I don’t think he would have made the cut,” she said.

According to Charlupski, the naming or renaming process is essential and it needs to be deliberate, though she understands Brown and Greenwald’s desire “to do something quickly”. As part of the process, the first question that needs to be asked is if the school should be renamed, and then determine which name to select, Charlupski said.

Should Town Meeting follow the by-law, the process to evaluate the name and identify a new one would take longer, than passing the petition to immediately change the name to Roland Hayes. However, Brown agreed that an inclusive and transparent process is important.

“As much as it adds time, yes,” Brown said. “That’s the only way people will have the opportunity to be heard.”

Other schools to be examined

In addition to looking at Devotion School, the School Committee is also planning to review all the other schools as well and determine if any of them should be renamed.

“The goal is to engage in a thoughtful, deliberate process that includes an inclusive community conversation that takes up the issue, looking at all of these schools and comes to a conclusion on the appropriateness of all of these names,” said Pollak.

In looking to Town Meeting, Brown feels the petition will be a measure of how committed the town is to the resolution it passed last May to implement the Government Alliance on Race and Equity, GARE.

“They made a real statement about who we want to be and I think the renaming of the Edward Devotion school is one of the first opportunities to see where their commitment lies, how strong and steady is that commitment,” said Brown.