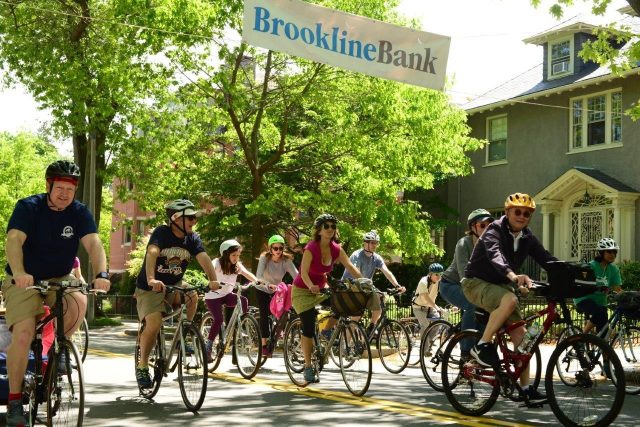 Cyclists of all ages took to Beacon Street for a sunny and cheerful afternoon of riding in the 10th annual Brookline Bike Parade on May 21, 2017.

A popular event, this year the parade saw a crowd of 450 to 500 enthusiastic bicyclists, according to John Dempsey, who helps coordinate the Brookline Bicycle Parade for the Bicycle Advisory Committee.

The parade, which stretches through town down Beacon Street, serves two purposes – to encourage bike riding and to build community.

“It’s a community event, my motivation is to get people in the community out there and bikes are a vehicle to do that,” said Dempsey. “And I wanted to encourage people to ride bikes.”

Intended for bike riders of all ages and levels, the parade included two routes – a five-mile loop down Beacon Street, and a 1.5-mile-loop that started and ended at Amory Park.

Though the shorter route was open for children 10 years and under, many young riders could be seen on the Beacon Street route keeping up with other riders according to Dempsey.

For those riding along with the crowd, the parade seemed endless.

“When you’re in the parade it looks like thousands,” said Dempsey. “Thousands ahead of you and thousands behind you.”

The event was particularly special this year because it honored Brookline Police Officer Ronnie McNeil, who will be retiring after over 36 years with the department.

McNeil has played a key role in the parade for the 10 years that is has run by coaching the marshals, setting the pace and stopping cross traffic at intersections as the officer leading the parade, according to Dempsey.

Though the parade gave a nod to McNeil, there was no special ceremony planned to thank McNeil or celebrate his retirement. According to Dempsey, this is because McNeil didn’t want any, as a purely a behind-the-scenes kind of person.

“He doesn’t want the limelight, he just prefers to do the work in the background,” Dempsey said.

In addition to his work with the bike parade McNeil has made himself a community fixture as a coach for several Brookline High School sports teams and as one of the two officers to lead the D.A.R.E. program.

The parade marshals were able to say goodbye to McNeil privately as he led the parade of bicyclers down Beacon Street for the last time.