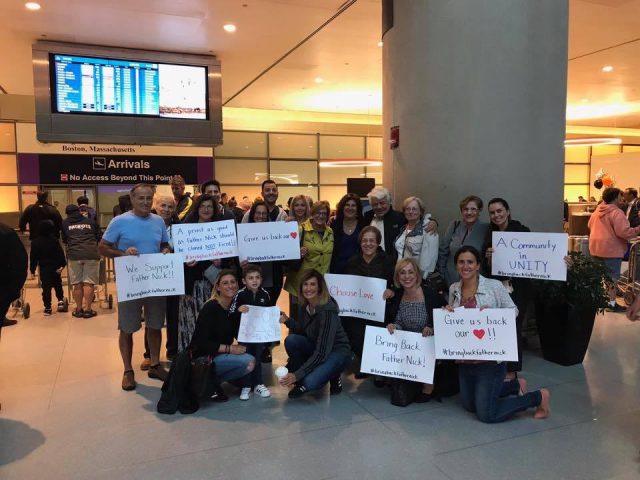 The fight continues for a number of confused and angry parishioners and supporters of Father Nick, more than a month after he was abruptly told he was to step down from serving at the church he had served for nearly three decades.

Supporters were shocked, and motivated to respond. To do something to show their support and find answers. Now, they plan to host a peaceful protest at Hellenic College/ Holy Cross Chapel in Brookline. They are organizing ride shares to make sure as many folks from Arlington can get to the Orthodox Greek campus.

Their mission: then and now? To get answers, to get the higher ups to listen and respond.

“Not much has changed” Corina Kapetanakis who helped organize the vigil outside the church said ahead of the protest. Supporters plan to hold signs along the street outside the college and then go into the 5:00 p.m. vespers service wearing “Bring Back Father Nick” shirts.

Parishioners were given short notice – some by email, some by word of mouth – that Kastanas was to give his last sermon a just more than a month ago. In response, they packed the church, sent out an online petition, raised money and took to social media in frustration. They hosted a vigil in the rain at the church less than a week out. And when the governing members came back from abroad met them at the airport to air their grievances.

Eventually someone from the local governing body of Greek Orthodox churches (the Metropolis based in Brookline) posted another note on their website, that parishioners called vague. The immediate and very vocal response from his supporters seemed to be met with very little response. An alleged promise to Kastanas that he could go and retrieve his belongings was reneged, according to supporters and his lawyer.

They expressed credulity after they discovered Kastanas was not permitted to gather his items from the church, and the church changed the locks.

Scheft said Kastanas came to him after he realized the Metropolis confiscated his private materials. Scheft said he took out a restraining order against the church after attempting to contact them to resolve the issue out of court.

The Metropolis in the area made the announcement in an email that was posted to the church’s website that weekend indicating it had to do with some turmoil in the church. But Kapetanakis said the term “turmoil” does not seem to fit her experience with Father Nick.

“He’s helped a lot of families. When my dad was in the hospital he stood by him day and night. He’s that kind of man. And he’s probably done it for hundreds of other families,” said the Medford resident who has known him most of her life.

Eleanor Profis is one of those parishioners who said she cannot imagine the church with another priest. “He’s totally selfless. He gives to the needy, he is really the most kind, loving, charitable person you will meet in your life,” she told Patch at the vigil last month.