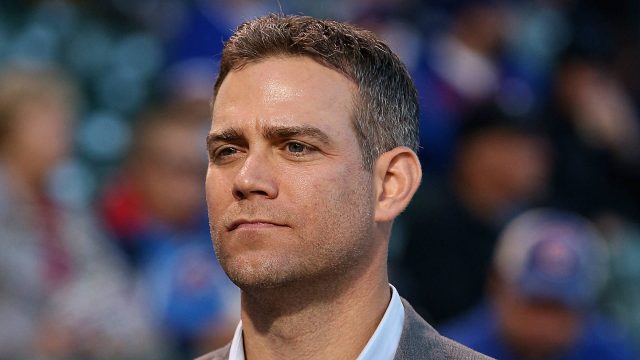 When Fortune Magazine unveiled their list of “The World’s 50 Greatest Leaders,” the top spot didn’t go to an outstanding CEO as it often does.

It was not a strong world leader, nor a particularly philanthropic celebrity. Fortune went outside the box. Heck, the Pope finished third.

The No. 1 spot belonged to the man that has done the unthinkable in baseball, Theo Epstein, born in Brookline, MA.

Epstein was the architect of the teams that slayed the two biggest dragons in his game’s history. He made his name as the whiz kid that broke the Red Sox’ 86-year World Series drought, and cemented it last fall, ending the Chicago Cubs’ 106-year title-less run.

Tonight Epstein returns to Fenway Park with the Cubs, a future Hall of Famer.

But long before he was passing Pope Francis, Epstein was just another junior-varsity baseball player at Brookline High School.

On those dusty fields almost three decades ago, Epstein was already beginning to display the intellect, drive, and people skills that would mold him into the greatest leader in the free world.

In the spring of 1989, Epstein was a sophomore on Harvey Soolman’s JV team. As a teenager, Epstein was not blessed with great physical talent. He was a scrawny pitcher, but one determined to make an impact. He played alongside his best friend, Red Sox President Sam Kennedy.

“Even though he was a pretty small and slender kid, he never had any fear,” Kennedy said. “He was never afraid of the other team. He was a grinder, he wanted to play because he just had an incredible passion for the game.”

Epstein stood out to Soolman in one game in particular, a 24-1 thrashing. It was a Brookline Warriors loss.

“We were getting killed by Brockton,” Soolman recalled. “It was only the second inning. There was nobody out and my starter is getting plastered all over the place. So I bring Theo in, and he got killed. But he went six innings getting the stuffing kicked out of him and that really showed me a lot. He really worked hard. He was throwing just as hard in the seventh inning as he was in the second.”

This is not a tall tale Soolman explains, as he opens the score book.

“He went six innings, gave up 12 hits, 13 runs,” Soolman read. “I remember thinking this at the time, he really showed me a lot. The starting pitcher wanted to know if we can all go home already. We didn’t have 10-run mercy rules or anything, but (the starter) is looking at me like, ‘Well I’m out of the game, we’re getting killed, do we have to finish?’ He actually said something like that to me. Theo on the other hand, was very professional about it as much as he got slaughtered out there. That did show me quite a bit.”

Inning after inning, Epstein wanted to go back out. It was an early sign of the drive that would make him a champion.

“I was proud of him. He just went out and did the job,” Soolman said. “I really enjoyed having him on the team. Although, I’m shocked at his baseball success, I never saw that coming, but I’m certainly not surprised that he’s a big success at whatever he tried, because he was really a very sharp kid.”

By senior year, Epstein had made it to Brad Cohen’s varsity team. Epstein was playing the infield now, but made some of his most valuable contributions coaching third base. His mind for the game was undeniable.

“It was like having an assistant coach, he was so intelligent,” Cohen said. “We used to talk strategy. I always had him coaching third base because he was so bright and such a good baseball guy, really.”

Like Soolman, there is one game in particular that Cohen goes back to.

The Warriors were playing Norwood, Eastern Massachusetts’ top team in 1991. Brookline was in the midst of a forgettable season, but they were matching the Mustangs stride for stride. Late in a tied game, Epstein approached his coach in the dugout.

“Theo and I were talking about a situation that might come up the following inning. He brought it up, and said ‘it might be a good time to have so-and-so bunt.’ Sure enough, it came up,” Cohen said.

So Cohen went with Epstein’s suggestion and bunted the go-ahead runner along. Kennedy came to the plate.

“Sam got the game-winning hit and Theo thought of it before I did,” Cohen said. “That’s the type of kid Theo was. He wasn’t playing all the time, but he was so helpful. If you had kids like that all the time coaching would be so much easier.”

“He would have made a great coach, a great baseball manager, because he knew the game so well,” Cohen said. “He was so interested.”

Cohen did not know where Epstein would wind up after graduation, but like Soolman he knew one thing: the kid would be successful.

“When he was in high school he just loved baseball to death. It’s hard to know with a guy like that,” Cohen said. “He could have been a great lawyer.”

“Theo would be successful at anything he tried. He was just that intelligent and bright.”

Almost thirty years later, Epstein has three World Series Championships on his resume. The Chicago Tribune ran a cover story with him walking on water. In Fortune, he passed the Pope.

But through it all, Epstein has never taken himself too seriously. Whether it’s donning a disguise to see a Pearl Jam concert, or sitting with the fans at Wrigley Field, he’s always come across as relatable. That has not changed.

“He fooled around, he was fun, but he wasn’t a wise guy.” Soolman said. “He was funny, a good teammate. Guys liked him.”

Kennedy has a story he likes to tell to illustrate this.

“The two of us were widely known as the two slowest members of the baseball team,” Kennedy explained.

So when the Warriors would run sprints at the end of practice, the two that finished in last place would have to race each other around the diamond. One would go clockwise and the other counter-clockwise.

Epstein and Kennedy were frequent last-place finishers, and liked to have some fun with it.

“We’d always have to race each other, and he’d try to hit me with a punch below the belt as we rounded second base. We’d try to throw each other off,” Kennedy laughed. “We loved baseball, we were very passionate about it, but we didn’t have much of a (playing) future in front of us.”

And who won most of the races?

“I’m embarrassed to admit, Theo,” Kennedy said. “He had a little more foot-speed given he was a soccer player. But we were definitely the two slowest.”

Cohen believes Epstein’s people skills have helped him to become such a revered executive. A lifelong Red Sox fan, it makes sense to Cohen that Epstein was the general manager to banish The Curse of the Bambino.

“He’s not only bright, but he’s also very perceptive. He’s a very good reader of people,” Cohen said. “So honestly, I wasn’t that shocked. As a Red Sox fan I was over the moon, but if anybody would do it, I would have thought it was him because he’s just that capable and that motivated.”

Almost thirty years have passed, but some things never change.