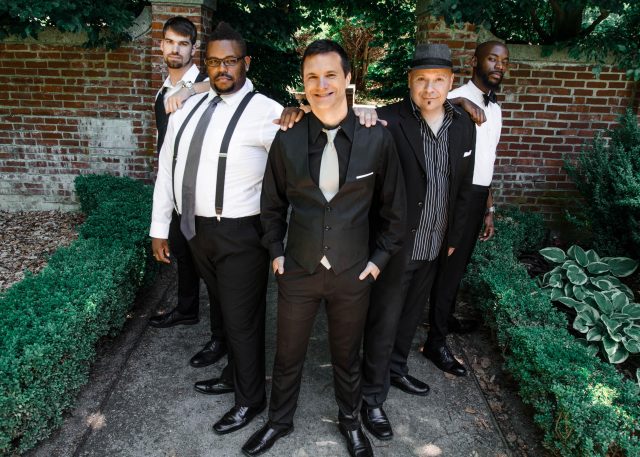 Performing and touring as a group for 17 years, a capella band Ball in the House is coming to Brookline. The group will close out the Brookline Summer Concert Series with a performance on August 9.

This year, the concerts will be held at Cypress Field instead of Emerson Garden, which will close for renovations. The series, organized by Brookline Recreation, will run the length of July through August 9, with a new concert each Wednesday from 6:00 p.m. – 8:00 p.m.

Ahead of the concert, band member and tenor Dave Guistitook some time to answer a few questions.

1. How did Ball in the House come into being?

Jon, our beat boxer, sang a cappella in college and after performing with some college friends during the summer months on the Vineyard, he wanted to try and do a cappella full time after college. After a few years of getting BinH started, they have been a full-time, touring group for 17 years averaging 230 shows a year.

The name came from a “Brady Bunch” episode. While trying to come up with a name for the group, the guys took a break and un-muted the TV. There was an episode where Peter was playing ball in the house and broke a vase. “Ball in the house” was said about 25 times and one of the guys said, “How ’bout Ball in the House?”

3. What do you enjoy about a capella?

I think it’s just the blend of the voices and when a chord rings out and you get the “musical chills”, it’s magic. Plus to create harmony with four other guys that you see as brothers is such a great feeling.

4. Does anyone in the group play an instrument?

We all play keyboard and we were all in our school bands when growing up. Instruments are key to us when we are writing original music. We are for sure “pro-instruments”.

5. Do you have any signature songs or songs that you just love performing?

Our tag line is “Music that’ll MOVE Ya.” so we are all about moving the audience. I would say a few songs that we are known for are “Imagine,” “Falling Slowly,” “Sign, Sealed, Delivered” and a cool Bill Withers classic, “Ain’t No Sunshine.”

6. Do you have any memorable moments from any of your performances?

That’s tough. To be honest, we get those moments at every show. It could be when someone is bopping their head to a fast song or an older couple holding hands during one of our slower songs. Talking to the audience members after the show is so fantastic. All these moments are special. They really are. We really believe that it isn’t about us.  It’s about moving the people who come out to see us. They could choose to be somewhere else, and they are wit us. There is magic in that. It might sound corny, but it’s the truth. We are just so humbled that we are still doing what we love and people want to see us. We will never take that for granted.

7. Any advice for aspiring a capalla singers?

Keep learning and take care of your instrument: Your voice. Remember to listen on and off stage. You don’t have to sing the lead to be important. When we work with singers and workshop with middle and high school choruses, we always tell them “Just be nice. People remember nice.”

8. What can the Brookline audience expect from your performance on August 9?

You will hear some oldies and some contemporary hits on the 9th. From disco and soulful classics of the ’70s to some doo-wop to some Bruno Mars and other contemporary artists of today. All performed 100 percent live and 100 percent vocal. We are super excited for the show.

Over the years, we have been performing at over 100 schools a year with our in-school educational outreach program called, Totally Vocally. We performed at many schools in Brookline over the years. During the assembly, we teach students of all ages about the History of A Cappella, how we do what we do and mostly we try to inspire student to stay involved in music and the Arts, “play sports AND play an instrument.” Music is something that you carry throughout your entire life. Jon and Dave grew up in Dorchester and met at the Boston Boys Choir School in Cambridge way back in the fifth grade. Along with the other guys, they share their experiences being a guy and being in chorus (both positive and negative) with students. We are five brothers who care for each other and just love creating harmony with each other. Hopefully it will show on the 9th.