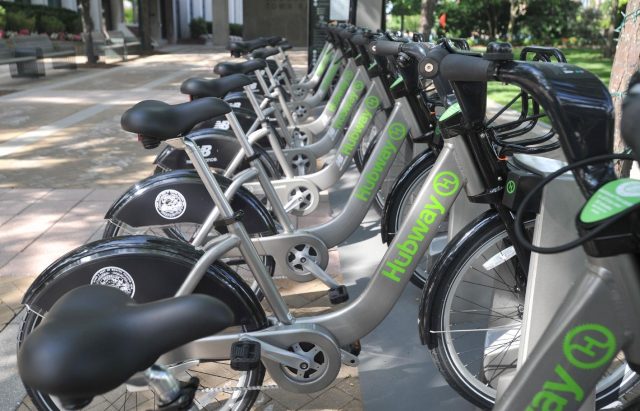 With the Commonwealth Avenue bridge construction now underway, many commuters will find themselves struggling to get to work.

Commonwealth Avenue will close to all traffic except for MBTA buses, emergency vehicles, pedestrians and cyclists. Shuttle buses will replace the B branch of the Green Line for the duration of the project. Amtrak and commuter rail commuters will also be transferred to shuttle buses for two weekends.

In an effort to ease the disruption, Hubway, a major bike share company contracted by cities around the Boston area, has partnered with MassDOT to install two temporary bike stations, one at Babcock Street in Brookline and the other at Silber Way in Boston. These temporary stations will be available for the duration of construction, from July 26 to August 14, 2017.

“All the bikes were checked out,” said Benjy Kantor, the senior marketing manager at Hubway. “That doesn’t even always happen to the regular stations on Commonwealth Ave.”

These temporary stations will hopefully alleviate some of the transportation inconveniences. Though cars will not have access to Commonwealth Avenue, bikes and pedestrians will.

The three permanent bike stations along Commonwealth Avenue will continue to operate throughout construction.

“We need the extra stations because it will be difficult for people to get where they’re going. People can get Hubway bikes for the final stretch of their route once they get kicked off the Green Line,” said Kantor.

Additionally, during this limited timeframe, Hubway will be offering two significant discounts: $1 per 30-minute ride, as opposed to $8, and also $20 off an annual membership. These discounts can only be accessed through their app, as well as through Hubway ambassadors – people employed through Hubway – stationed at the temporary bike stations during weekdays. The ambassadors will be available to help in the mornings from 7:00 a.m. to 10:00 a.m. and in the evenings from 4:00 p.m. to 7:00 p.m.