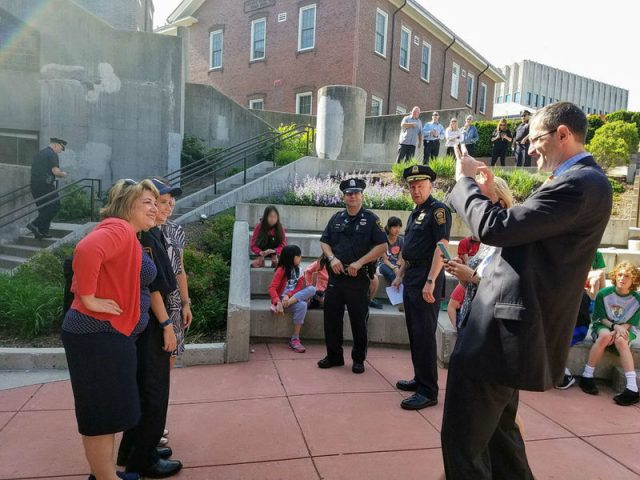 For the second time in two years, the Pierce School has a new interim principal, after Christine Kelley accepted a newly created assistant superintendent position in Pentucket.

Superintendent Andrew Bott named Lesley Ryan Miller as the interim principal for the this year just a month before school is slated to start on September 7, 2017.

“A school leadership transition at this late date in the Summer is always challenging, and can be anxiety provoking. The Public Schools of Brookline, however, is in the enviable position of having Ms. Ryan Miller – an outstanding internal candidate – ready to step into this critical leadership role,” said Bott in an email home to families recognizing that it was a bit of a late move.

Miller joined Brookline Public Schools just over a year ago as the senior director of teaching and learning where she focused on supporting the K-8 elementary schools.

A representative from the Superintendent’s office said they anticipate running a full search similar to the ones they ran this past year for the “permanent” principal. That search will be timed in a way that the principal would start July 1 of next year, according to the representative.

Kelley came on last year after Pipier Smith-Mumford retired at the end of the last school year after 17 years as principal of the Pierce school and 31 total in Brookline. School in Brookline begins on September 7, 2017.

Kelley was the interim principal of Winchester High School before taking this position, and before that she was a principal at Winchester elementary school from 2010 to 2015. She was also a principal in Woburn, MA. Kelly had experience as a teacher for 18 years teaching grades six, three, two and one. She lives north of Boston with her husband, Tim and their three children who range in age from 24 to 15.

Kelley was one of 35 applicants to the new position in Pentucket.

“Kelley is cited for her success with parent engagement, high energy, relentless drive and attention to detail,” the Newburyport Daily News reported.

The salary for the assistant superintendent’s position is budgeted for up to $145,000.

Of the nine schools in Brookline, each has had seen some change in leadership over the past two years.