Did the former owner of the Village Smokehouse plot with a local handyman to burn down a failed construction project on Spooner Road in 2013 in an effort to get insurance money? That is what jurors are considering as the trial of Alan Kaplan kicked off Thursday.

Fifty-seven-year-old lifelong Brookline resident, owner of multiple businesses and developer Kaplan sat in the middle of the court room wearing a dark suit, orange tie and headphones over his ears to help him hear the proceedings as opening statements began. He was arrested in 2015 in connection to the multi-alarm fire at 81 Spooner Rd. – one of the biggest fires the town has dealt with in recent history, according to the now retired deputy chief who worked it. The fire destroyed a house under construction on July 26, 2013. A Jamaica Plain man, Steven McCann, who had ties to Kaplan, was later convicted of setting the fire.

Prosecutor Carolyn Hely and defense attorney Max Stern took turns in the Norfolk Superior Courthouse outlining what they said happened leading up to the fire. Jury selection finished Wednesday and the judge instructed jurors not to research the case, which has become well known in town.

Kaplan was among three men who had bought 81 Spooner Road under an LLC in 2004. The trio had the intention of fixing and selling the house, divvying up the parcels, building a second house and selling that one, too. After selling the first house and starting to build the second, the process ran into problems. Neighbors weren’t happy, the Town got involved, and there was litigation.

The central issue was that the house was too big for the Chestnut Hill lot. The construction stopped after the house was framed, while litigation went on until the end of 2012. After twice going to the highest court in Massachusetts, that court ordered the LLC to tear down the house. 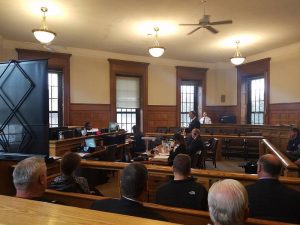 “In Spring of 2013, the LLC is in a bind,” said Hely. “They have to take down the house, the lot is not buildable. There’s no way to extract any money from this land. There’s nothing they can do.”

Kaplan refinanced his property at the Smokehouse and used that to pay the bank where he borrowed $800,000 for the development efforts. But he still owed $800,000.

Enter McCann: A 29-year-old returned Marine suffering from PTSD and a drug problem, depression, separation from his wife, and living on a mattress on a friend’s place in JP.

“To put it mildly, he’s having a hard time,” said Hely.

“He was ‘spiraling out of control,’ according to his own lawyer in court,” said Stern.

McCann had worked with Kaplan in the past and Kaplan, according to both sides, had been generous to him.

In Spring of 2013, McCann met with Kaplan. McCann said he had gone in person to express condolences to Kaplan after his wife was diagnosed with cancer. It was then when the topic of money – and 81 Spooner Road – came up.

This is where the two sides’ agreement on the story comes to an end.

The attorney for the Commonwealth said Kaplan brought up setting fire to the project as an option and already planned it. McCann then offered to execute it. Kaplan’s motive? $1 million in insurance money covering the $800,000 loan debt.

Stern said there was no such motive because the insurance agreement would not dish out $1 million if there was no rebuilding. Kaplan also told the jurors to be wary of the testimony McCann because he had received a plea deal with the Commonwealth. In exchange for his testimony they would agree to drop the arson charges and recommend time served on setting fire to a building.

“After they met, Steven McCann set fire to Spooner Road. And he did that because of this meeting with Alan Kaplan,” Hely said. “Seems like a good plan: House burns down, if there’s any evidence it probably burns down with the house, and the odd chance that Steven McCann does something wrong he’s the only one that literally gets burned. On the off chance that Steven McCann starts talking, well, the defendant is a prominent local business owner in the town. He knows the police and fire-fighters… and [McCann] is suffering from mental problems, who’s going to believe him?” she said.

McCann set the fire. The question, asked the Commonwealth’s prosecutor is why? She told the jury.

“The only answer to that question is going to be Alan Kaplan, the defendant,” she said.

Stern pulled over a podium and faced the jury to address them with his opening remarks, as Kaplan turned to face the jury.

“There’s another side to this story,” Stern said, painting a picture of Kaplan as a fourth-generation member of Kaplans, living with his daughter and son in Brookline, his wife having passed away from cancer in 2015.

Stern described Kaplan as an “extraordinarily generous man … a shirt-off-your-back man,” as friends and relatives sat in the court room behind him nodding.

He painted McCann as untrustworthy, someone who would do anything to get out of going back to jail. Stern said McCann’s story had changed.

He called the police investigation itself a “rush to judgement” and “incomplete and selective.” He held up a bright orange plastic bucket with a metal handle similar to the ones McCann said were filled with gasoline and were used to start the fire, and told them the metal handles were not recovered from the fire, throwing into question if the story about how the fire was started was true.

“There is no dispute that McCann was the arsonist. And there’s no dispute that they met the day before the fire. But Mr. Kaplan denies proposing this fire or even knowing about it. The fire was Mr. McCann’s idea in the expectation and false hope that he’d be rewarded,” he told jurors.

Following the conclusion of the first day of trial, friends and family gathered around Kaplan, hugging him and patting him on the back.