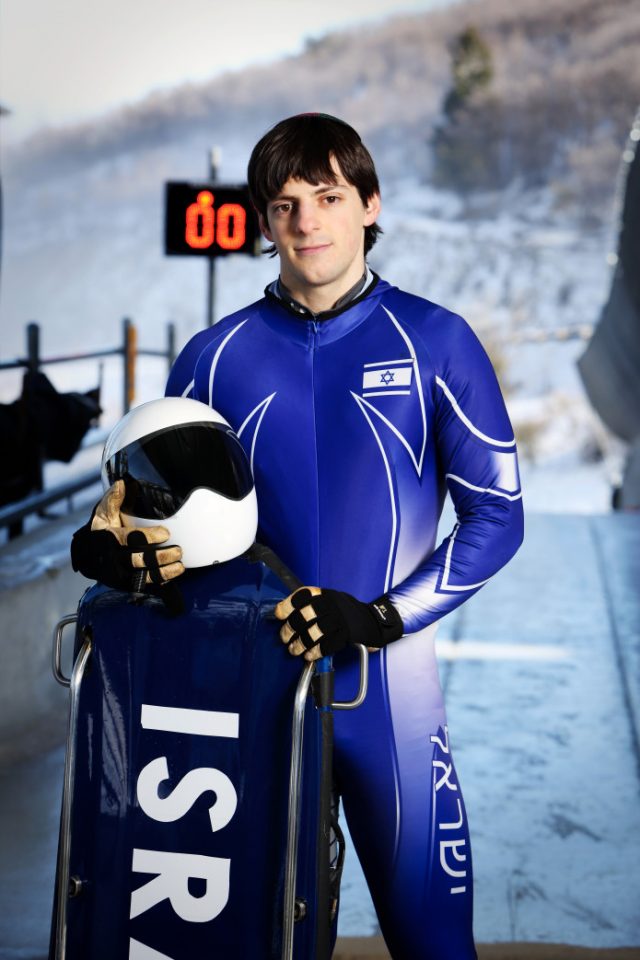 The sport of skeleton is not for the faint of heart. Starting from a crouch, riders take a running start while grasping a small sled, which they ride down an ice track at speeds of up to 80 m.p.h. At the Pyoengchang Olympics this winter, riders will be staring down a 1,372 meter track, with an 116 meter vertical drop throughout. Adam “A. J.” Edelman, Israel’s first ever competitor in skeleton, is not too concerned.

The Brookline native made aliyah in 2016, but his time on the ice goes back his time in hockey pads at the age of three for the Brookline Warriors. He continued playing the sport through his time at the modern Orthodox Maimonides School and at MIT, where he was “believed to be the first shomer-shabbat player in the history of the program,” according to his Team Israel bio (Edelman had also spent a year at a yeshiva before going to school). He graduated with a degree in mechanical engineering in 2014, and was hired to work as a product manager for Oracle. In that career path so well-traveled, he also spent a brief period between his time senior year at M.I.T. and Oracle exploring options in drug-free bodybuilding, speedskating, and luge.

But he soon grew restless. The truth was, back in 2006, he had been in Israel during the war with Lebanon, and it had cemented something for him. “That summer changed my life. I turned everything around in my life from that point on. I knew Israel was the place I wanted to call home when I grew up,” he told the media.

Edelman had discovered that Israel had a skeleton team in the fall of 2013, but knew little about the sport at the time. This was, apparently, little more than an inconvenience. At first, his goal was to qualify for the 2022 Games.

“When I started the journey I wrote on a piece of paper that I had 2,884 days to reach my goal. But the more people said it would be impossible to do it in four years the more I wanted to accomplish it,” he said.

“I have a lot of chutzpah. If somebody tells me that something can’t be done it is the most motivating thing for me to try and make sure that it will be done. So I took the paper and crossed out 2,884 and wrote 1,442 and made it my goal to do it in four years.”

So he quit his job at Oracle and moved to Calgary, sanscoaching, funding, or any formal training, to begin gearing up for the 2018 Olympics.

His mother was not pleased. “She flipped out,” he said. “She lost it, she was really upset. Her first response was: ‘Who is going to date you?’ She’s a Jewish mother.”

But Edelman’s done nothing but impress since he arrived four years ago. Competing for Israel with an image of Samson on his helmet, he has represented Israel at two World Championships and is, as of now, ranked no. 61 in the world. He’s set Israeli track records everywhere he has gone.

“I just go from track to track training like a nutjob,” Edelman says. “It became an obsession for me to do everything that I could to make sure Israel qualified for the 2018 Olympics…My coach was the pain. There is a lot of pain involved in hitting a wall. But the more I did it, the more experience I got and the more I was able to coach myself.”

Now, in two weeks time, he’ll be among the largest Israeli delegation to the Winter Olympics—ten athletes!—that’s ever qualified for the Games.

“There is a pride as a Jew and as an Israeli in representing Israel that I don’t think can be felt by any athlete of any other nationality,” he said. “People a lot of time ask about my placement or my goal at the Olympics and if I want to win a medal. The dream of every athlete is to win a medal for their country.”