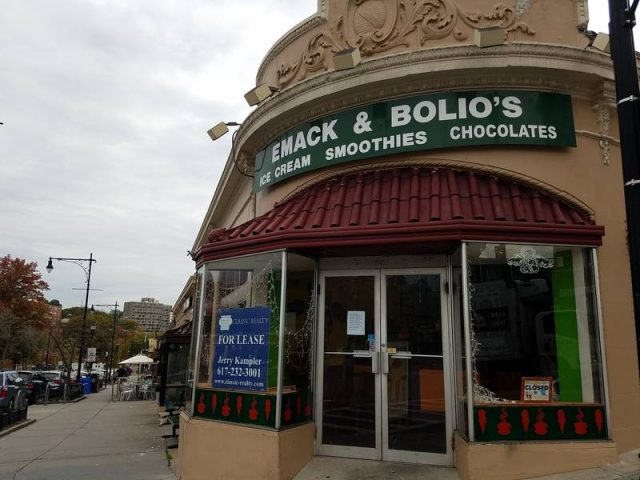 Emack & Bolio’s. The Brookline-born ice cream shop that started in a Coolidge Corner area basement serving up homemade scoops after hours to rock stars after shows before it bounced around and opened on the corner of Beacon and Winthorp Road is now closed.

“I loved that shop. I live in Brookline we started in Brookline. Brookline is near and dear to my heart,” said Emack & Bolio’s owner Robert Rook. “It’s sad to have closed a store that I go.”

Why close then? The owner said the rent was too much.

“Our lease came up and the rent went way up,” said Rook. “A lot of people have written me that they’re upset that we’re closing but you know you have to make decisions and sometimes they’re not decisions that you want to make.”

Rook said rents are out of control for a small business person. He would not say how high the rent was going up but he pointed to the empty store fronts on Newbury Street as well as Brookline, but said he had a good relationship with his landlord.

“He has to get what he has to get. I understand his position. But our position is it’s not worth it,” he said

The ice cream joint that was founded in 1975 by Brookline resident Rook, an attorney and advocate who represented with homeless, gay rights advocates and a number of rock bands. 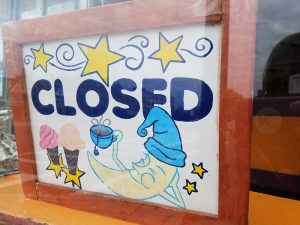 The store was named after two homeless men for whom Rook did some pro bono work. They asked him to name the place after them. And he did.

The Washington Square corner shop served ice cream along with a scoop (or two) of whimsy with its bright purple and green and yellow walls over wooden floors for almost two decades. A wooden boat sat in the front window and hand dipped cones sat on display, a holdover from the Aquarium location.

It was a kid’s dream shop.

But this is not the end of Emack & Bolio’s.

The chain has more than nine other locations in Massachusetts and spread to New York, New Jersey and Illinois. The focus of the chain is now on expanding in Asia. He has had shops open in six Asian countries including Thailand, China and Hong Kong. Rook said they’re booming in Asia and recently opened three shops there and another is slated to open soon in Singapore.

“I just want to thank everybody for the many years of happiness and joy that they brought us and we hope we brought them. The people of Brookline are great they’re my neighbors, my friends, I love them dearly: That’s just the deal,” said Rook.

So many Brookline closings?

This closing comes after a number of recent closures in Washington Square including the Pantry, Silvan Learning, a hair salon and clothing boutique on the block across from the Washington Square T stop and next to FastFrame, the framing shop formerly owned by Hsiu-Lan Chang who is also president of the business association. 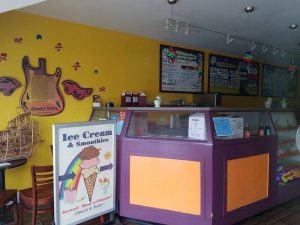 “I can understand that they closed cause it’s such a seasonal thing,” she said. “In the winter time it must be so tough because they don’t do anything besides ice cream. I commend them for having stayed that long.”

Chang said her grandchildren loved the place. “So they’re going to be disappointing when they hear their favorite ice cream shop is going to be gone,” she said.

Then there is Coolidge Corner: Recent closings there (and many of them come to businesses who have been there for many years) include Lady Grace, Pier 1, Vitamin World, Panera, Radio Shack, Khao Sarn, Second Time Around and Shanghai Jade.

But Brookline isn’t alone here. Retail appears to be in a decline across the country.

“An estimated 5,300 retail locations have closed through June 20, according to one estimate – nearly triple the rate from a year ago. That makes 2017 poised to surpass the number of closings in 2008, in the depth of the Great Recession,” the Christian Science Monitor reported this summer.

The way to ensure that the local shops stay in Brookline, said Chang is to actually go and frequent the businesses.

But also some openings:

There has been a number of openings recently in Brookline, too. The Best Burger joint opened this summer as did Curds &Co and a new record shop in Brookline Village. In Coolidge Corner a Japanese Tea House is slated to take over where Panera once was, and rumors put a Sweet Green where Lady Grace once was. Where Lineage closed its doors on Harvard Street, Prairie Fire opened to rave reviews. And although the Fireplace closed its doors for the last time in Washington Square this summer a Mediterranean seafood restaurant is slated to take over the spot. When the Cleveland Circle Travel closed a Barre studio opened shortly after.