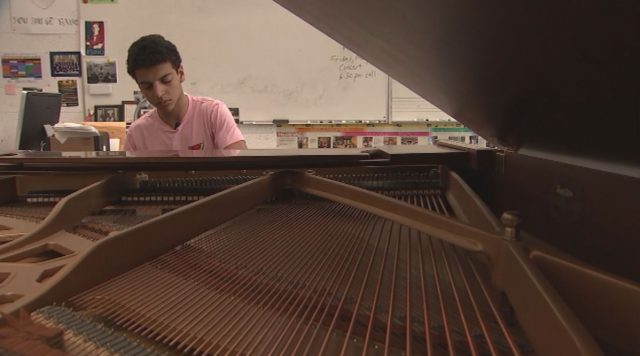 To hear him play, it is obvious you are in the presence of a wildly talented concert pianist.

“I just fell in love with the sound and all the possibilities,” said Amir Siraj.

But to see him play, it’s shocking to realize that he’s only 17.

“I play piano because I love to make music,” he said

Amir, from Brookline, has been playing since he was 4 years old. Now at 17, he is one of just four classical musicians in the country to be honored with a U.S. Presidential Scholar in the Arts award.

Receiving the award, which is open to those 15 through 18, takes several layers of application, review and then an audition master class, where the top 170 takes classes and workshops with artists and then perform. From there, the winners are selected.

When Amir found out he was one of the lucky 20 to be honored, he was floored.

“I was kind of breath-taken. I didn’t know how to react. I was so honored,” said Amir.

Amir’s dream job is to be a concert pianist, though he’ll attend Harvard in the fall to study the sciences.

While that might come as a surprise, he said that they are a lot more similar than people think – neither works without creativity, imagination and flexibility.

“Whenever I run into a problem with a piece I go back to square one and I say, how can I look at this a different way,” he said.

His teachers say the award speaks to the type of person Amir is; Amir says he wouldn’t be himself without music. And for that reason, Amir said he will use his award as an opportunity to speak out in favor of the supporting the budget for the National Endowment for the Arts.

“If I could have just one message, it’s to support funding for the arts,” he said.

President Donald Trump has proposed cutting the budget, a program that funds arts and education across the country.

As part of his award, Amir will have the chance to perform at the John F. Kennedy Center for the Performing Arts in Washington, DC.